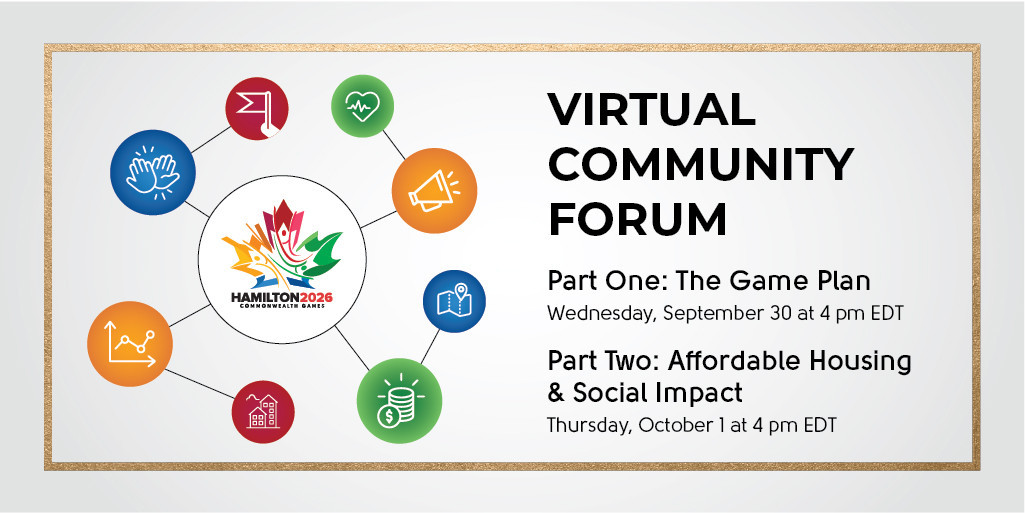 Organisers seeking to host the 2026 Commonwealth Games in Hamilton in Canada will tomorrow vouchsafe to the City Council that there will not be any post-Games financial obligations for the running of venues.

Speaking at a virtual community forum, Lou Frapporti, the chair of the Hamilton 2026 Bid Committee, said: "When we release publicly the information that we are proposing to put forward to the Council, and I think that will be filed in the City on October 2, which is Friday, you will see that we have created a spreadsheet that sets out the current and proposed operational responsibility in terms of planning.

"We have sought to ensure that the city will not have any obligation for any incremental costs associated with any event.

"We have done that by securing the support of private sector partners for venues, they will have operational responsibility post-Games, we've got the support and have secured the partnership of institutions like the Universities of McMaster and Redeemer.

"So we are not looking to add a penny.

"And because we were very concerned about ensuring that the city and the public were satisfied as to the validity of our numbers, we consulted with the city and obtained their direction for conducting the city auditors KPMG to conduct an analysis of our finances relating to the venues and our operating costs and to provide that report publicly, ensuring that the impacts - negative or positive - on the levy of the city finances are disclosed.

"That process is underway and we will make that information available publicly.

"From a financial perspective, understanding that a Provincial secretariat would be the central budgeting player for the Games and that a variety of different municipalities would be partners, the financial opportunity for the city of Hamilton is, we think, incredible."

Asked if Hamilton would be able to "pivot back" to staging the 2030 Commonwealth Games - marking the centenary of its hosting the inaugural Games - if organisers were are unable to gain city approval for 2026, Frapporti responded: "Simply, yes we are.

"In our initial consultation with the Federation when they asked us to consider the opportunity it was entirely conditional from our perspective and our not jeopardising 2030 as a competitive bid.

"That is not an exclusive offer to host, but in the event that the 2026 for whatever reason isn't successful, we of course are positioned for 2030.

"Having said that we will announce at City Council that the 2030 bid, even though it has been approved by all levels of Government, had been completed prior to the pandemic at much higher cost with a price tag of well over CAD$500 million (£293 million/$376 million/€320 million) and not focused on priorities like housing.

"We simply as a group don't believe that bid is credible.

"We are going to use this process if it is not successful in obtaining approval for 2026 to be the foundation for the re-structuring and re-building of the 2030 bid so that it can achieve the results that we have worked so hard in the last few weeks to obtain."

"And we believe that even with dramatic reduction we still have some significant legacy projects that we will be providing to the city of Hamilton.

"In the case that the will of governing bodies is to further reduce costs, we do have alternate venues, regional venues that we could host the various sports events in tomorrow.

"In doing so we would have a low-cost option at around CAD$175 million (£102 million/$131 million/€112 million) and we believe that would be amongst the most cost-effective capital plans in the Games' recent history."

Asked about the timing of the decision over the hosting of the 2026 Games, which has already gone beyond the initial Commonwealth Games Federation deadline of the end of September, Frapporti said: "I can't say - it's a very dynamic situation.

"The Federal Government has indicated that it is supportive of 2026 contingent upon the Province supporting and we are in discussions with the leadership of the Province to see whether there is a path to support 2026, and we are optimistic.

"Then of course we are looking to City Council in Hamilton for their support and blessing.

"From our perspective, we won't be rushed.

"This process must permit the consultation required to make it effective – and the Federation has been incredibly supportive in allowing us to do that.

"We hope it's going to be the next couple of months, but we can't say for sure."

A study recently commissioned by the bid organisers, conducted by PricewaterhouseCoppers, said staging the Games would contribute between CAD$300 million and CAD$374 million (£219 million/$279 million/€240 million) to the city's gross domestic product.

"I'm sure it will be important, along with a subsequent report on the impact on affordable housing," Frapporti said.

"I suspect that, and I believe I know from consultations with Government, that most of them are aware of the economic impacts of the hosting of the Games and I think the report is an important insight from a risk and management perspective."