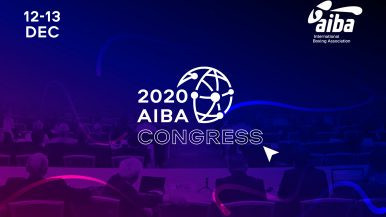 A key vote to decide who will be the new President of the International Boxing Association (AIBA) is to be held on a virtual platform because of the coronavirus pandemic.

The AIBA Ordinary Congress was originally due to be held in Budapest but rising COVID-19 cases in the Hungarian capital have led to increased restrictions on travel.

The virtual Congress, however, will still take place on the original dates of December 12 and 13.

AIBA members will elect a new President and vote for the new Constitution of the organisation.

AIBA Interim President Mohamed Moustahsane wrote a letter to all the National Federations in advance asking their opinion on the upcoming Congress format.

The majority of the members agreed that a virtual event is the best solution in the current pandemic situation.

The controversy surrounding Rakhimov and allegations of financial mismanagement at AIBA led to the International Olympic Committee (IOC) stripping the world governing body of its right to organise the boxing tournament at Tokyo 2020.

Statute changes, considered vital if AIBA is to regain its status with the IOC, are also due to be voted on at this year's Congress.

Under AIBA's current Constitution, Moustahsane's mandate as Interim President expired on March 29, exactly 365 days after he was elected following the resignation of Rakhimov.

The Moroccan's tenure was further extended after the AIBA Executive Committee allowed him to continue until the postponed Congress.

The voting system for the new President will be overseen by LUMI Global, which claims to be "the leading player in software and real-time audience engagement technology worldwide".

"Today we decided to conduct our next Congress virtually," Moustahsane said.

"We also chose to use LUMI as a technical system for voting.

"I am sure that this decision is the most appropriate in the current circumstances.

"We will take the best experience of our colleagues to make this Congress a success."

So far, the only candidates to have declared publicly are Azerbaijan's Suleyman Mikayilov and the Dominican Republic's Domingo Solano, but Russia's Umar Kremlev is expected to throw his hat into the ring soon.

Before they can officially stand, all the candidates must be approved by the AIBA Ethics Commission.

It was announced today that it will be chaired by Switzerland's Bernhard Heinrich Welten.

The 54-year-old is founder and partner of KanzleiWelten in Bern and an arbitrator at the Court of Arbitration for Sport (CAS).

In February 2018 he was a member of the CAS Ad-Hoc Panel at the Winter Olympic Games in Pyeongchang.

Meanwhile, the new chair of AIBA's Disciplinary Commission has been announced as Francois Paul Strydom.

The South African lawyer is already chairman of the International Chess Federation Ethics and Disciplinary Commission.