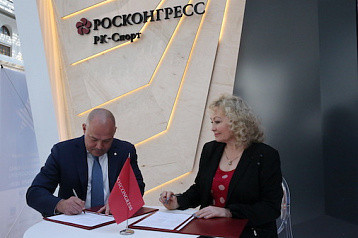 The Russian Bobsleigh Federation (RBF) has signed an agreement with the Roscongress Foundation to promote the sport both in Russia and around the world.

RK Sport is the sport platform of the Roscongress Foundation, a "socially orientated non-financial development institution" and organiser of international events.

"We have been successfully cooperating with the Roscongress Foundation for a long time," said Anikina.

"Now we have decided to give our partnership relations an official status.

"The agreement provides for participation in joint sports events, international congresses and symposia, exchange of experience and information.

Anikina revealed the creation of the Sports Investment Bureau was another factor in the partnership.

Developed by the Roscongress Foundation and supported by Russia's Ministry of Sport, the Sports Investment Bureau is an online platform which aims to attract investment in the sports sector.

"I believe that cooperation within the framework of the Sports Investment Bureau, which the Roscongress Foundation plans to launch in the near future, is particularly interesting and promising," Anikina said.

"This will be a platform where sports organisations and business structures can meet, communicate and implement joint projects.

"I am glad that the Russian Bobsleigh Federation became one of the first residents of the Sports Investments Bureau."

It is hoped he will boost the national skeleton team’s hopes of medal success.