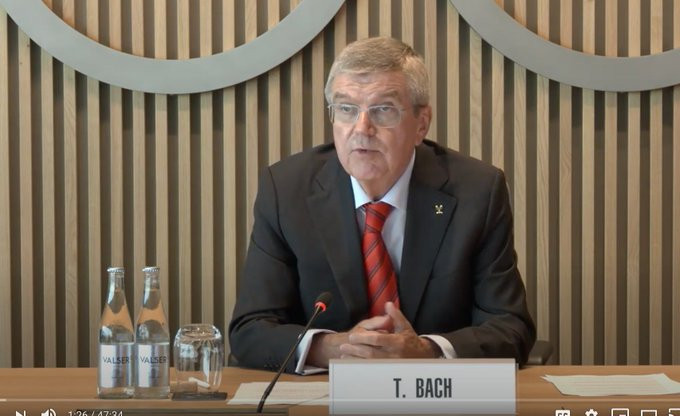 According to Japan's Foreign Ministry, it was the first call between the two since Suga, who succeeded Shinzō Abe after he resigned due to ill health, took office a week ago.

Suga received a majority in both houses to confirm his new position as leader of the country, having previously been elected leader of the Liberal Democratic Party, which Abe was previously in charge of.

Bach and Suga reaffirmed their commitment to making the Games "safe and secure" for both athletes and spectators, according to Kyodo News.

The IOC and the Tokyo 2020 Organising Committee have agreed to a simplifying of the Games due to the financial impact caused by the COVID-19 pandemic.

On the call, Bach congratulated Suga on taking office and stated that the Tokyo Games would be a "historic" event that could bring hope to the Japanese people, according to the Foreign Ministry.

Suga then assured Bach, saying that his Government was working hard to keep the COVID-19 virus under control and discussing ways to stop the pandemic affecting the Games with the Organising Committee.

Bach said he hoped to visit Japan when it was safe to do so, with the call ending with both sides agreeing that a "strong message" needed to be sent to athletes across the world with the hosting of the Games.

The IOC President is hoping to speak to Suga in person at the end of October.

Suga also met with Tokyo Governor Yuriko Koike today for the first time since taking office and the two agreed to cooperate regarding the Games, pushed back to 2021 because of the coronavirus pandemic.

"We share the view that cooperation between the central Government and the Tokyo Metropolitan Government will contribute to the national interest," Koike told reporters after the meeting.

The Tokyo Olympics are scheduled to take place from July 23 to August 8 2021, with the Paralympics following shortly after from August 24 to September 5.