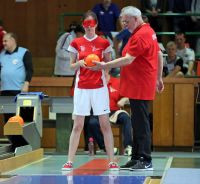 The International Blind Sports Federation (IBSA) European Ninepin Bowling Championships have been postponed again to 2021 due to the COVID-19 pandemic.

The competition was previously delayed back in March ahead of its planned staging in May, with new dates of November 22 to 29 set.

Tarnowo Podgórne in Poland is now scheduled to host in May 2021, so a year later than initially planned.

Exact dates will be published by IBSA at a later time.

IBSA has been busy in the past months, and recently announced that blind football would be part of the 2023 IBSA World Games.

There are also ongoing talks about reclassification for blind athletes in sport.

Love football? Join us at the IBSA World Games in Birmingham in 2023 for a trio of World Championships!

It comes after British blind athletes called for change last month over a "discriminatory" measure which would prevent B4 category athletes from competing.

The B4 classification is recognised by British Blind Sport but not the IBSA, leaving a number of visually impaired athletes who fall into the category unable to participate at international competitions.

People who see at six metres what the fully sighted could see at 24m are included in the B4 category.

Those classified as B4 would be able to register as sight-impaired in the United Kingdom.