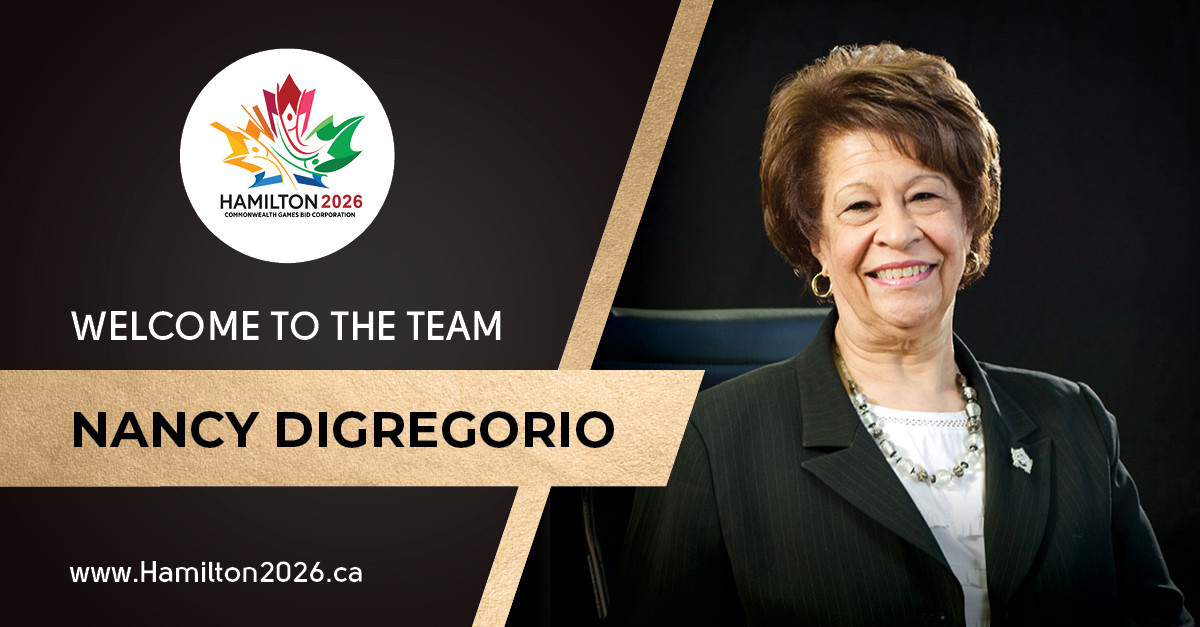 The Hamilton 2026 Commonwealth Games bid team has announced that one of the longest-serving public servants in the city, Nancy DiGregorio, has joined its movement.

DiGregorio will help curate a plan to deliver a legacy to the community in the Canadian city, in a bid to deliver economic, social and educational benefits to Hamilton.

She has long been a part of Ontario's civil service, first serving on the Hamilton-Wentworth Catholic District Board where she was a teacher.

DiGregorio then became a department head, vice-principal and principal, before finally becoming the superintendent of education – the post where she retired.

Her position started after she attended McGill University in Montreal.

After graduating she went to Uganda where she was an instructor at a teacher-training college for two years.

DiGregorio has been part of the community in Hamilton outwith her work in education, having been on the Board of Directors at the Hamilton Community Foundation, St Jerome's University, Waterloo, the YMCA Hamilton/Burlington and the Collegium of Work and Learning.

She has also held the same position for the St Joseph Women's Centre, the Good Shepherd Centres and the Industry Education Council.

For eight years, she was a provincial appointee to the Hamilton Police Services Board, serving as chair of the Board from 2011 to 2013.

She was also the vice-president of the Ontario Association of Police Services Board and currently serves on the Board of the Tandia Credit Union.

DiGregorio was the recipient of the Canadian Educator of the Year Award in 1999, the Vision 20/20 Award from the City of Hamilton in 2000, the John C. Holland Award for Community Service in 2006, the YMCA Peace Medal in 2007 and the Woman of Distinction Award in 2008.

Currently, Hamilton looks to be the favourite for the 2026 Commonwealth Games, with other potential bids coming from India and Shah Alam in Malaysia.

A decision on who will host the 2026 Games was initially expected to be made by the Commonwealth Games Federation (CGF) in 2019, before being pushed back to this year.

However, no city has been announced yet and the decision could be pushed back further.

Hamilton 2026 admitted last month that it will miss a CGF deadline to secure commitment from municipal, provincial and federal partners due to the "magnitude of the work being undertaken".

The Canadian city was initially pursuing the 2030 Commonwealth Games, which would mark the 100th anniversary of the city hosting the inaugural edition of the event, then called the British Empire Games.

But the CGF instead encouraged Hamilton to switch its focus to 2026 as it was the only bidder.