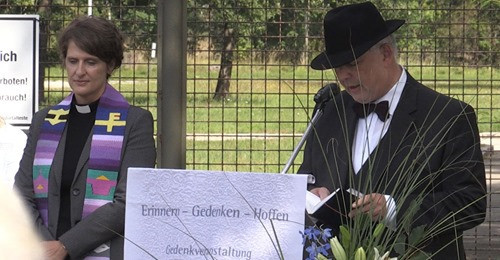 A small ceremony has been held to mark the 48th anniversary of the murder of 11 Israeli athletes and officials and one West German policeman at the 1972 Olympic Games in Munich.

About 50 participants, including Munich's Mayor Katrin Habenschaden, rode to Fürstenfeldbruck, the site of the Munich Massacre, by bike to mark the event.

They started in the morning after a brief memorial in Munich's Olympic Park.

Flowers and stones were placed on the memorial in front of the air base and a prayer was read out.

Last month, German and Israeli fighter jets flew in formation over Fürstenfeldbruck to honour the victims.

A wreath was also laid on Connollystrasse in the Olympic Village - in front of the building at number 31, where the hostage drama began in the early hours of the morning of September 5 in 1972.

Remembering the Past, Shaping the Future ????

48 years after 11 Israeli Olympians were murdered in the 1972 Munich Massacre, the Israeli and German Air Forces held a joint exercise in Germany, including a flyby over the site of the attack: pic.twitter.com/ofMGQ73rLl

A group of eight Palestinians from the "Black September" group raided the Olympic Village.

They infiltrated the Israeli living quarters and killed an Israeli weightlifter and wrestling coach before taking nine others hostage.

The Palestinian attackers demanded the release of prisoners held by Israel and two left-wing extremists in West German jails.

To prove their resolve, the attackers castrated one of the Israelis before he was shot dead and tossed the body of the other out on the street.

A lengthy negotiation with West German authorities ensued, with much of the drama unfolding on live television.

At one point, two of the hostages were allowed to have a brief conversation with German authorities through a second-floor window to prove they were alive.

But when one tried to answer a question he was clubbed in the head with the butt of a rifle.

The kidnappers were transferred to an airfield, along with their hostages, under the guise of meeting their demands.

But amid a failed German rescue attempt, the Palestinian kidnappers opened fire on their hostages and hurled a grenade inside one of the helicopters in which the Israelis were bound.

Altogether, 11 Israelis were killed, along with the policeman, and five of the kidnappers.

This weekend marks 48 years since the Munich Massacre, when Palestinian terrorists murdered 11 Israeli athletes at 1972 Munich Olympics simply b/c they were Israelis. In their memory, we must continue to fight this type of #antisemitism and #antizionism that still persist today. pic.twitter.com/g1LgGUcHI2

The Games were put on hold for 34 hours.

Despite heavy criticism they resumed upon the decision of International Olympic Committee (IOC) President Avery Brundage, who already faced charges of anti-Semitism for his instrumental role in the 1936 Olympics and close ties to Nazi officials.

Families of the Israeli victims have long campaigned for the IOC to mark the massacre during the Opening Ceremony of subsequent Olympics but only at Rio 2016 did they finally commemorate the incident with a special ceremony in the Olympic Village.

During that event, IOC President Thomas Bach read the names of the "Munich 11".