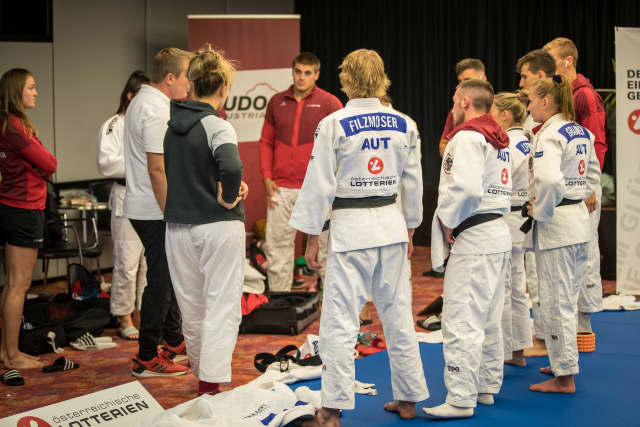 Austria and Germany held a joint training camp as preparations for the resumption of the International Judo Federation (IJF) season continue.

The Austrian Judo Federation hosted the camp, which was arranged at one of broadcaster ORF's regional studios.

Judokas and coaches were required to undergo tests for coronavirus before taking part.

The Austrian team had recorded three positive tests the previous week, with those affected required to go into quarantine.

"All went well here, Austria's training camp together with Germany has been an awesome opportunity for everybody to get back to a somewhat 'normal' rhythm, with testing, prepared protocols and rules," said Austria's Sabrina Filzmoser.

"We feel really lucky and privileged to get such an opportunity, while others around the world are struggling to even get back on the tatami.

"The friendly competition between Austria and Germany has been well organised and Austrian television ensured it was a high quality project.

"While there had been many injuries just before, also many of us had not had the best possibilities to get into a high-level competition mode, as we would have wished to, because we've had three positive COVID cases just one week before, followed by a strict quarantine.

"There was a huge chance of cancellation, but our federation and the new President, Martin Poiger, gave all of their possible effort and energy.

"Massive thanks to our German neighbours for coming over during this challenging time.

"They were awesome and also really eager to fight the first match and to train with a foreign country, after six months in off-mode."

The IJF has confirmed the World Judo Tour will return in October, with three major events planned in the coming months.

The Budapest Grand Slam is scheduled to take place in late October and is planned to be followed by the Tokyo Grand Slam in December.

The plan is for the World Judo Masters to then be held at the start of 2021 in Doha, with all three events offering qualification points for next year's Olympics in Tokyo.