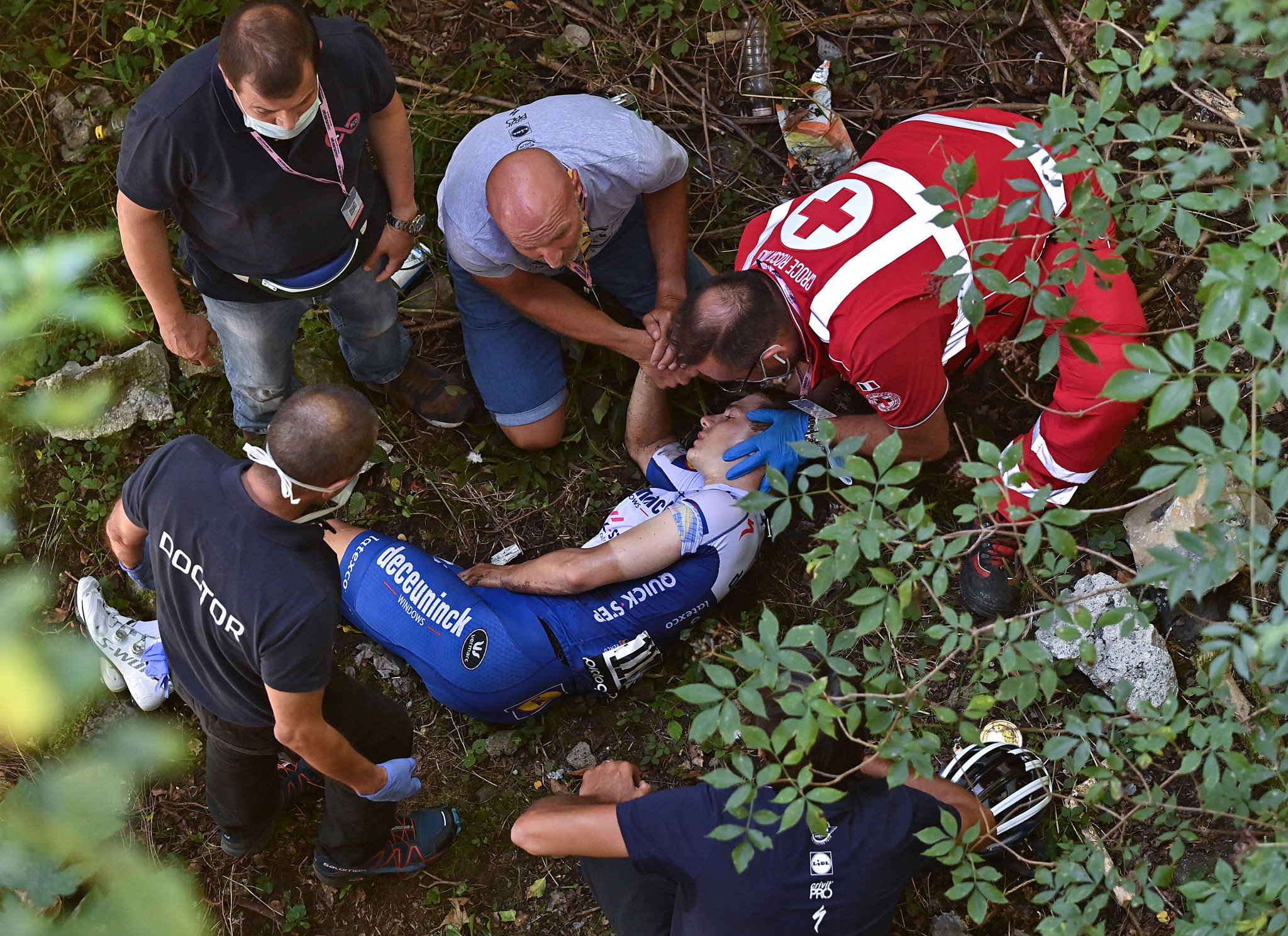 Deceuninck-QuickStep says it has informed the Cycling Anti-Doping Foundation (CADF) a small bottle containing nutrition products was removed from Remco Evenepoel after his crash at Il Lombardia, following the launch of an investigation.

Evenepoel suffered a pelvic fracture after falling from a bridge during the Il Lombardia earlier this month, with the injury ruling him out for the remainder of the season.

"We've asked CADF to further investigate the television images and question witnesses about the object that came out of Evenepoel's pocket," Lappartient was quoted as saying.

"The directeur sportif said he thought Evenepoel had fallen as no more data was being sent.

"What data are we talking about then?

"After all, it is forbidden to send certain data, so, we are also looking at that point.

"If it is only about geographical position then it's something else, but sharing other data is not allowed."

The UCI allow the use of onboard technology, but prohibit the transmission of data to third parties unless approval is granted.

Some reports had suggested the item could have been a data device, which could have illegally transmitted power data to the Deceuninck-QuickStep team car.

These claims have been denied by the team, who maintain the item was a small bottle containing nutritional products.

"We would like to clarify that we have been contacted by CADF earlier this week to discuss the incident surrounding Remco Evenepoel’s crash at Il Lombardia earlier this month," a Deceuninck-QuickStep statement read.

"As has already been stated publicly, the item that was captured being removed from Remco’s pockets was a small bottle containing nutrition products and was removed in order to help him to be placed more comfortably by medical staff on the stretcher.

"We have reiterated this to CADF and we will continue to cooperate with their enquiries if needed.

"With regards to the transmission of data, we would also like to clarify that data such as live location is transmitted by the Velon device that was installed on bikes during Il Lombardia by Velon in partnership with the race organiser.

"The devices allow everyone, including the fans, to track and see rider data live in the race.

"We are confident that this will put an end to any further speculation surrounding the incident."

This the proof that CADF is not neural because they said there are operating independent without @Uci. This is clearly not true

Deceuninck-Quickstep manager Patrick Lefevere has hit out at the UCI requesting CADF to investigate the incident.

"This is the proof that CADF is not neutral because they said there are operating independent without UCI.

"This is clearly not true."

Lefevere has previously criticised the UCI for using dangerous courses.

The UCI earlier this week announced it would initiate "a far-reaching reform of the safety conditions in conjunction with the riders, teams and organisers."

The governing body said the work will aim to make "an objective and shared assessment of the current situation, marked by the repetition of crashes endangering all riders, and introduce improvements which – in some cases – will be able to make use of new technologies."