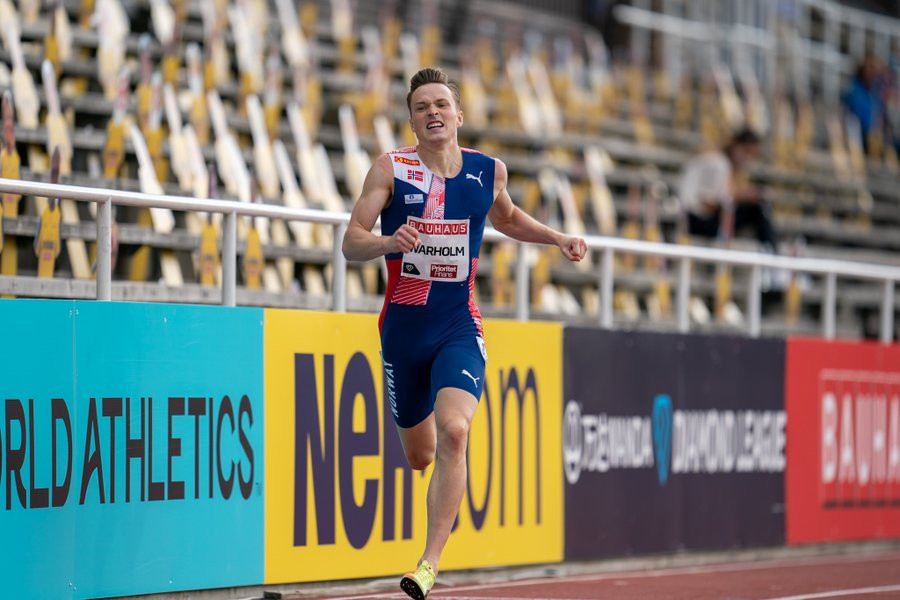 Karsten Warholm came agonisingly close to breaking the world 400 metres hurdles world record of 46.78 seconds at the Wanda Diamond League meeting in Stockholm, clocking 46.87 in a race where he had done everything right apart from knocking over the last hurdle.

Had Norway’s 24-year-old double world champion managed to negotiate that final barrier the mark set by Kevin Young of the United States at the 1992 Barcelona Olympics would surely have been beaten.

Warholm had arrived in the Swedish capital intending to better his winning mark of 47.10 set at the opening Diamond League meeting of the season in Monaco last Friday week, and, with a characteristic go-from-the-gun effort in lane eight, he succeeded.

But his reaction afterwards spoke eloquently of mixed emotions – it looked as if he knew only too well what he almost had in his grasp.

The disappointment was hardly crushing however, as he demonstrated a couple of hours later with another barnstorming effort from lane eight.

The men’s 1500m – the last event of the programme - produced the same result as it had in the opening Diamond League meeting in Monaco as world champion Timothy Cheruyiot earned his 11th win over Norway’s European champion Jakob Ingebrigtsen.

Once again the 19-year-old tracked the Kenyan at the bell, but could not find a way to get past him as Cheruiyot won in 3min 30.25sec, with Ingebrigtsen – who had broken Sir Mo Farah’s European record in clocking 3:28.68 in Monaco – finishing in 3:30.74 ahead of Australia’s Stewart McSweyn, whose gutsy run was rewarded with a personal best of 3:31.48.

In the women’s 1500m Britain’s European champion Laura Muir pulverised a top quality field in what was her first 2020 race at her specialist distance, leading into the bell and opening up a gap of almost 40 metres as she won in 3:57.86, the fastest time run this season.

Muir’s training partner Jemma Reekie, also coached by Andy Young, carried on where the European champion had left off as she dominated the women’s 800m, holding off the challenge of world silver medallist Raevyn Rogers and drawing away to win in 1:59.68, with the American second in 2:01.02.

Home pole vaulter Armand "Mondo" Duplantis, who broke the world record twice earlier this year with indoor clearances of 6.17 and 6.18 metres, had vowed before this competition that he would be concentrating on making first-time clearances, particularly in his early efforts, in order not to offer opportunities for rivals operating more efficiently – and in particular the double world champion Sam Kendricks of the United States.

First time success at 5.53 and 5.73 put the 20-year-old European champion in command after Kendricks struggled at the latter height, and that early discipline looked even better when the latter, despite soaring way over the bar at his third attempt, brought it down with a stray leg, putting his hands to his head before he hit the pit.

HELLO!@mondohoss600, out on his own, clears 6.01m at the first attempt and takes the bar up another 6cm.

Meanwhile #Mahuchikh takes victory in the HJ, clearing 2.00 at the third attempt to pull away from #Levchenko.

Duplantis’s face was a picture of mixed emotion – but Belgium’s Ben Broeders succeeded where the American had failed to maintain the challenge for the local hero. But failure at 5.83 left Duplantis as the winner and the bar was then moved up to 6.01 which he also cleared first time to put a centimetre on the 2020 world lead he had set in Monaco, and set a Stockholm meeting record.

His ambition then soared to an attempt to clear 6.15, which would have bettered Sergei Bubka’s 1994 outdoor world record by a centimetre, but in gusting winds that target proved beyond him – for now.

Victory in the women’s pole vault went to Britain’s Holly Bradshaw who cleared 4.69.

Unlike Monaco, where limited numbers of spectators were allowed, this event took place in a largely empty stadium with atmosphere provided by the system that uses audio effects to mimic normal conditions at an athletics competition.

South Africa's 2017 world bronze medallist Ruswahl Samaai had been among those adding his opinion to the statement put out yesterday by The Athletics Association criticising the "Final Three" long jump format being road-tested in this meeting, commenting: "There’s no need to change a format that has been working for decades."

But he nevertheless managed to negotiate successfully the set-up in which the leading three jumpers after five rounds earned a sixth jump, with the best of that final round being proclaimed the winner.

Having earned a sixth jump, Samaai made the most of it, winning with 8.09 metres, three centimetres further than home jumper Thobias Montler – whose 8.13 efforts in the second and third round were not sufficient to earn him a victory.

Afterwards Samaai made it clear that he was less than impressed with the process, even if he had benefited from it, tweeting: "I won the competition based on a format that’s not fair towards the guy with the furthers distance.

"Our event is simple.

In the women’s long jump home athlete Khaddi Sagnia also led the way into the final round of jumps with a personal best of 6.83 – and also failed to win, although the eventual victor, Maryna Bekh-Romanchuk of Ukraine, did better that mark with 6.85.

There's a reason he's the reigning world champion and owns three @Diamond_League 🏆@tim_cheruiyot closes the #StockholmDL with a 3:30.25 victory over 1500m. pic.twitter.com/W6uwi3mwJn

The high jump featured another episode in the ongoing rivalry between Ukrainians Yuliya Levchenko, the 2017 world silver medallist, and Yaroslava Mahuchikh, the world under-20 record holder.

Levchenko, 22, went top of the 2020 lists with a 2.00m clearance in Bydgoszcz as she beat her young rival on Wednesday, but here the younger jumper turned that round as she herself cleared 2.00, with Levchenko having to settle for 1.98.

With world 200m champion Noah Lyles having ended his season with his 2020 world-leading 19.76 clocking in Monaco, opportunities opened up for some of his leading rivals, and it was Britain’s Adam Gemili who took best advantage as he won in 20.61 with a following wind of 3.0 metres-per-second.

Home world discus champion Daniel Stahl roared his approval after sending his second-round throw out to 69.17m to take a lead he never lost, with compatriot Simon Pettersson second with a personal best of 67.72.

World 800m champion Donavan Brazier earned his tenth consecutive win, and his third in the space of 10 days, moving out into lane two and accelerating over the final 50 metres to clock 1min 43.76sec, 0.61 slower than he had run in Monaco.

Switzerland’s Ajla Del Ponte earned her seventh consecutive win this year as a late surge saw her clock 11.20sec to beat a field that included the 2017 world 100 and 200m silver medallist Marie-Josee Ta Lou of the Ivory Coast, who was third in 11.32.

Twenty-year-old Wadeline Jonathas of the United States, fourth in the women’s 400m at last year’s World Championships in Doha, won with relative ease in 51.94.