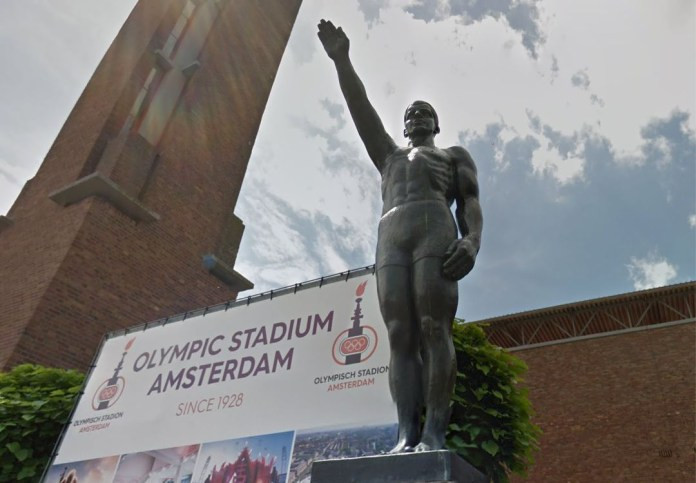 A statue of an athlete with his right arm raised is set to be removed from its pedestal at the entrance of the Olympic Stadium in Amsterdam due to its connotation with fascism.

The decision was taken by officials at the Stadium built for the 1928 Olympic Games following a year-long investigation, Dutch newspaper Trouw reported.

They concluded that the athlete is not doing a Hitler salute but the gesture is still linked to fascism.

The three metre statue has stood outside the Stadium since work on it was completed, several years before the Nazis came to power in Germany, but will now be removed if the City of Amsterdam agree to the request.

It had originally been claimed that the gesture was an ancient Roman salute as seen in stories featuring Asterix and Obelix.

Local officials in Amsterdam even erected a sign next to the statue giving that explanation.

But, after consulting with various historians and other experts, the Olympic Stadium Foundation concluded that there is no convincing historical evidence for this.

The story of the Roman salute likely comes from the famous 1784 painting "The Oath of the Horatii" by French Artist Jacque-Louis David, Van Haaren said.

The Foundation concluded in its investigation that Baron Pierre de Coubertin, the founder of the International Olympic Committee who spearheaded the launch of the modern Olympic Games, introduced the right armed raised gesture at Paris 1924.

That was at the same time as the rise of fascism in Italy under Mussolini, the Foundation determined.

The Italian fascist movement adopted the gesture as a salute.

Later, the Nazis in Germany did the same.

Van Haarem stressed that artist Gerarda Rueb did not have bad intentions when creating the sculpture.

"You have to keep the two lines well separated from each other," she said.

"You have the historical fact that the salute dates from a fascist era, and you also have the intention of the maker of the statue to express the so-called sporty greeting from 1924.

"Once you have established that the salute itself can be traced back directly to fascism, you have to take action."

The statue, which officially paid tribute to Baron Tuyll van Serooskerken who brought the Olympic Games to Amsterdam but who died before they took place, will therefore be removed from its spot at the entrance to the Stadium and placed inside the arena.

"You can see it during guided tours, then we can explain it," Van Haarem said.

In June, the Asian Art Museum in San Francisco removed a bust of former International Olympic Committee President Avery Brundage from its foyer because of concerns over his "racist legacy".

Brundage, who died in 1975, had opposed the boycott of the 1936 Olympic Games in Berlin during his time as President of the American Olympic Committee, as it was then called.

The bust was unveiled by the Asian Art Commission in 1972 and has sat in the foyer since in honour of the institution's founding patron.