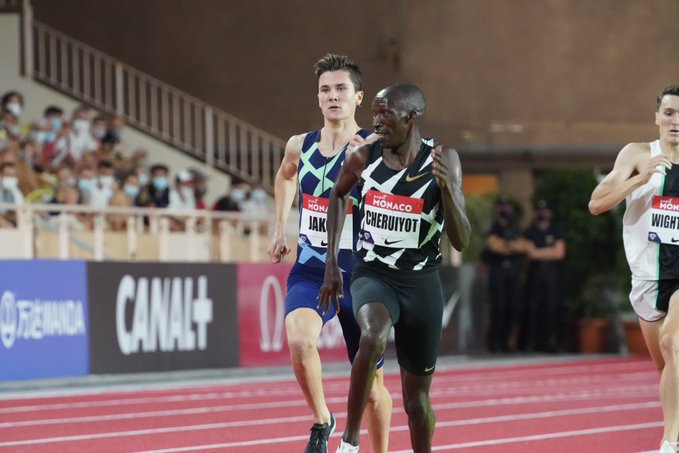 Timothy Cheruiyot and Jakob Ingebrigtsen - the respective world and European 1500 metres champions - will resume their intense rivalry at the Wanda Diamond League meeting in Stockholm tomorrow following their epic race at the opening of the series in Monaco eight days ago.

Wightman is not competing tomorrow, but a strong field also includes Ingebrigtsen’s elder brother Filip, the 2016 European champion who has a best of 3:30.01.

The final event of the Bauhaus-Galan meeting in the charmingly castellated 1912 Olympic stadium looks likely to prove a stirring one - and the roar of the crowd is guaranteed given the presence of the atmosphere creation system that uses audio effects to mimic real conditions at an athletics competition.

But another innovation - experimenting with a jump-off style show-down in the long jump competitions dubbed the "Final Three"- has been strongly criticised today by The Athletics Association, the umbrella organisation representing track and field competitors to which the majority of elite performers belong.

Both the men's and women's events will see the leading three jumpers after five rounds earning a sixth jump, with the best of that final round being proclaimed the winner.

In a statement, the Athletics Association, established in July this year with double Olympic triple jump champion Christian Taylor as President, stated its "opposition" to the "Final Three" format after speaking to "lots of jumpers and athletes around the world".

"Of the athletes that we spoke to, approximately 87% disliked the “Final Three” concept, including some athletes who will be competing in Stockholm."

The Athletics Association statement regarding the "Final Three" Long Jump format, due to be used at the @Diamond_League in Stockholm tomorrow.#WeAreTheSport @RuswahlSamaai@tibartoletta@JazminSawyers@iFlyNoWingshttps://t.co/MuwDQMDSco

One of those athletes, South Africa's 2017 world bronze medallist Ruswahl Samaai, commented: "The 'Final Three' brings no excitement to our event.

Tianna Bartoletta, the Rio 2016 long jump champion, said: "The problem is that they are attempting to make the event interesting by diminishing the effort of the majority of the field to create faux drama of a last round mini-final..."

And Britain's 2016 European silver medallist Jazmin Sawyers added: "Instead of adding excitement, it takes away the possibility of someone coming from eighth place to win the competition - infinitely more exciting than having the top already decided by round six.

"Following a full competition from start to finish is how to build drama and excitement, not rendering the first five rounds meaningless.

At least the sound system arrangement, which made its debut in Monaco, seems to have met with general approval.

Sweden’s pole vault world record holder Armand "Mondo" Duplantis credited it as having been of some assistance in his clearing of 6.00 metres at the third attempt in the Principality.

Naturally the 20-year-old European champion will be one of tomorrow night’s high-profile home performers as he resumes a rivalry every bit as keen as that of Cheruiyot and Ingebrigtsen with double world champion Sam Kendricks.

Duplantis, who broke the world record twice in a week earlier this year, has won 10 successive competitions and has beaten the American in all four of their meetings since the World Championships in Doha.

Another local-ish hero will be on show in the form of Norway’s double world 400m hurdles champion Karsten Warholm, who ran his second fastest time ever in Monaco when he clocked 47.10sec.

Warholm had originally planned to run the 400m flat - at which he won the European indoor title last year in equalling the 1988 European record of 45.05 set by Thomas Schönlebe of East Germany.

But such is his form he is clearly looking for another super-fast time for his CV - perhaps even closer to the 46.92 he ran last year that has been bettered only by Kevin Young’s world record of 46.78 from the 1992 Barcelona Olympics.

The start list for the #StockholmDL 🇸🇪 is looking 🔥

There's only 2 days to go, so check out the full timetable and start list here👇https://t.co/SAPFlswp4H

Two other world champions are due to compete tomorrow - home discus thrower Daniel Stahl and the American gold medallist over 800m in Doha, Donavan Brazier.

Stahl, who has won his last 11 competitions and leads this year’s rankings with 71.37m, will once again take on Lithuania’s 2017 world champion Andrius Gudzius.

Brazier, who tops this year’s 800m list with the 1:43.15 he ran in Monaco, made an unsuccessful attempt to set a world 600m best in Hungary last week, but is now switching back to his favoured distance in a race that also features the world silver and bronze medallists, respectively Amel Tuka of Bosnia and Herzegovina and Ferguson Rotich of Kenya.

In the women's 1500m, Kenya’s double world 5,000m champion Hellen Obiri, whose 14: 22.12 clocking in Monaco tops the 2020 lists, will test her speed against a field of metric mile specialists, including Britain’s European champion Laura Muir, who will be making her 2020 debut over her best distance.

The high jump features another episode in the ongoing rivalry between Ukrainians Yuliya Levchenko, the 2017 world silver medallist, and Yaroslava Mahuchikh, the world under-20 record holder.