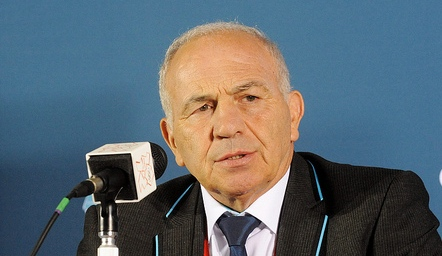 The International Boxing Association (AIBA) is to survey National Federations about holding a virtual Congress in December, according to European Boxing Confederation (EUBC) President Franco Falcinelli.

Holding the AIBA Congress virtually could be an alternative to further postponing the event into 2021.

"Dr. Moustahsane explained that in extraordinary circumstances, like the one caused by the COVID-19 pandemic, it is legally possible for AIBA to stage an online Congress and even hold Presidential elections in the same way," Falcinelli wrote.

"Technical aspects must certainly be considered and the Interim President plans to survey all National Federations on this important subject prior to taking a decision."

The AIBA Congress was originally scheduled to take place in the Hungarian capital of Budapest on March 20, before it was pushed back to June 20.

A decision was then taken by the AIBA Executive Committee to hold the Congress on December 12 and 13, due to the continued uncertainty caused by the coronavirus pandemic.

Among the key decisions set to be made at the Congress is a vote on statute changes, considered vital if AIBA is to regain its status as the Olympic governing body for the sport, and the Presidential election.

The Moroccan's tenure was further extended after the Executive Committee allowed him to continue until the postponed Congress.

It effectively meant AIBA, suspended as the Olympic governing body for the sport by the International Olympic Committee (IOC) last June, had breached its own constitution by not having an election for a permanent President within the time-frame outlined in the document.

AIBA's leadership hope the new statutes, being devised by a Reform Commission, will be passed at the Congress as part of its bid to be reinstated by the IOC.

The embattled organisation has been stripped of any involvement in the boxing tournament at Tokyo 2020 due to concerns over governance, financial management and the integrity of its competitions.

Its status will not be considered until after the Olympic Games, now postponed until 2021.

AIBA would be the latest governing body to move to a virtual Congress amid the impact of the coronavirus pandemic.

Falcinelli claimed last month that holding the Congress was a priority for AIBA, with the EUBC President criticising the governing body's intention to work more closely with the professional World Boxing Association (WBA).

Falcinelli said Moustahsane had sought to clarify the situation at the EUBC video-conference.

The AIBA Interim President reportedly assured Executive Committee members that "only preliminary discussions have been held until this stage with a goal of helping boxers to have a more secure career".

The discussions were claimed to also follow the "recommendations of Olympic Agenda 2020, which recommends International Federations forge alliances with professional governing bodies".

"Dr. Moustahsane announced his intention to create an inclusive working group to guide this project further and promised that exhaustive information would be provided to all National Federations prior to any formal agreements with WBA or another professional governing body," Falcinelli wrote.

The Italian highlighted efforts by former AIBA President C K Wu to increase ties with the WBA in the past, which were initially hoped to enable professional boxers to compete at the Olympic Games and lead to the launch of a Boxing World Cup.

Falcinelli said the participation of little-known professional boxers at Rio 2016 had "resulted in failure" and claimed the WBA's inability to ensure the best boxers could compete at the Boxing World Cup had led to the end of AIBA's partnership in 2017.

He also questioned the efforts to restart the partnership, with the Italian instead calling on AIBA's leadership to focus on electing a new President, clearing its debts and resolving ethical issues in the organisation.