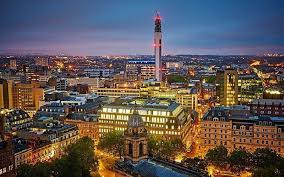 The Men's and Women's Blind Football World Championships are set to be held as part of the 2023 International Blind Sports Federation (IBSA) World Games in Birmingham after the tournaments were rescheduled because of the impact of the COVID-19 pandemic.

The men's and women's events had been due to take place in 2022 but have been pushed back a year following a reshuffle of the blind football calendar by the IBSA.

IBSA confirmed the partially sighted World Championships would also be staged during the 2023 World Games, the flagship blind sport event outside of the Paralympic Games.

The announcement was made by IBSA to mark three years to go until the Opening Ceremony of the 2023 World Games in the British city.

A total of 11 sports are due to feature at the 2023 IBSA World Games, set to be attended by over 1,000 athletes from more than 70 countries.

"This exciting news is sure to grab the interest of football fans around the world, especially in Britain where the sport is hugely popular," said IBSA President Jannie Hammershoi.

"With multiple World Championships showcasing the best that blind and partially sighted football has to offer, spectators will be able to get up close to the action in Birmingham as well as experience the other sports at the same time.

"We expect a wonderful celebration which will follow on from the 2022 Commonwealth Games also taking place in the city, and ahead of Paris 2024."

IBSA said it had moved the World Championships back by a year to create room for regional tournaments to be held in 2022.

The organisation has also announced the creation of a one-off "Kick-Out Coronavirus Cup", due to take place next year.

The men's Blind Football World Championships will be a qualifier for the 2024 Paralympic Games in Paris.