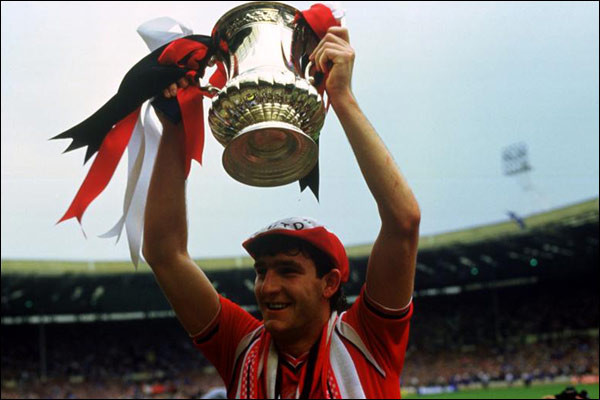 Whiteside had made history in 1982 when he broke Pelé’s record as the youngest player to take part in the FIFA World Cup.

He was only 17 years and 41 days when he made his international debut against Yugoslavia in Northern Ireland’s opening match of the tournament in Zaragoza.

At the time, Whiteside had made only two appearances for Manchester United and was earning £250 ($330/€280) per week.

He went on to score 68 goals in 278 First Division appearances for Manchester United and Everton before being forced into retirement aged only 26 in 1992 due to a long-standing knee injury.

Whiteside, now 55, revealed he had decided to sell some of the key items from his career to help fund his retirement.

The lot that fetched the biggest bid was Whiteside’s FA Cup winner’s medal from 1985 when Manchester United beat Everton 1-0 thanks to a goal scored by him.

In that particular Wembley outing, he became the youngest ever goal scorer in an FA Cup final at 18-years-old when Manchester United defeated Brighton and Hove Albion 4-0 in a replay.

Another notable football item in the auction was a Juventus home shirt worn by France international Michel Platini that Whiteside had swapped with him.

Whiteside was delighted with the success of the auction.

“This will go a long way to subsidise my pension that I never really had when I was a player,” he said.

“No one's pressurised me to do it, but now I'm 55 I want to make sure that all my pension provisions are in place.”