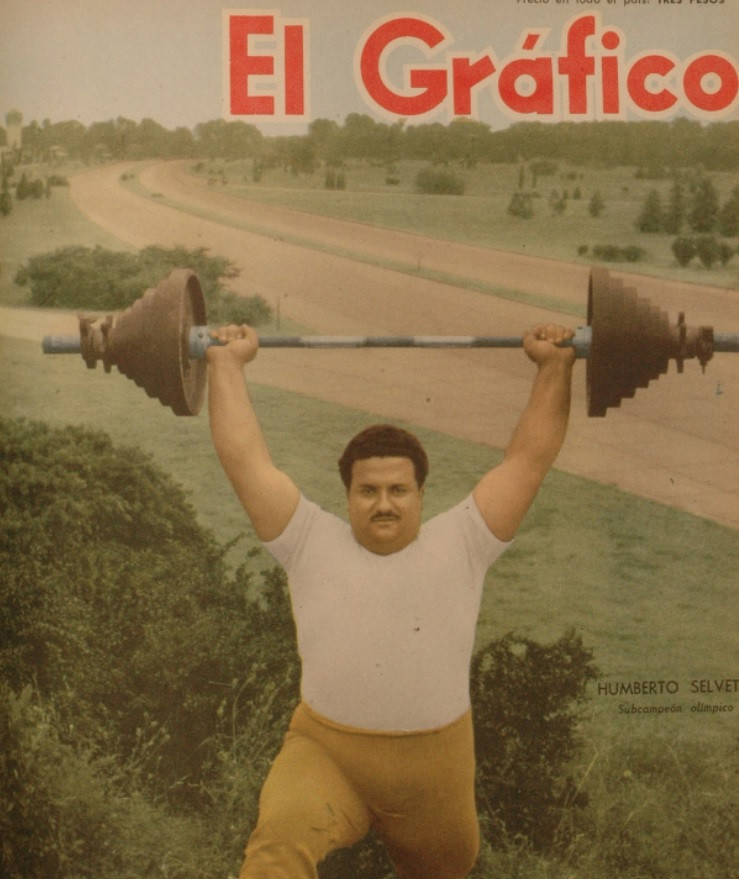 Humberto Selvetti, the first South American and first native Spanish speaker to win an Olympic weightlifting medal, is top of the list of athletes who will be inducted into the Pan American Weightlifting Federation (PAWF) Hall of Fame at a gala to be held on August 22.

The list of 20 inductees, which also features continental leaders, technical officials and coaches, is dominated by Cuba with 11 entrants.

They include the man known as "the father of Cuban weightlifting", 81-year-old Marcelino del Frade, who was trained as a coach in the Soviet Union.

Selvetti was a larger-than-life character who loved red wine, tango, steak and pasta and who featured in one of weightlifting’s most famous contests, the heavyweights at the Melbourne 1956 Olympic Games.

He tied with the American Paul Anderson, who broke the world record with his last lift after a five-minute delay and won because he weighed less than a downcast Selvetti.

Selvetti competed alone, without a coach, because the Argentine team was whittled down to the bare minimum of 28 across all sports, with nearly 100 of the original names dropped for political reasons after the 1955 revolution.

He always maintained that, with a coach or with any grasp of what level of performance to expect from his rivals, he would have attempted lower weights at key stages of the contests and would have won gold.

Among the spectators who watched the epic contest was Sam Coffa, the 84-year-old Australian who holds an advisory role for the International Weightlifting Federation Executive Board and who was a 20-year-old door keeper for the athletes at the venue.

The head-to-head between Anderson and Selvetti stretched way beyond midnight and featured three Olympic records and a world record.

Both men finished on 500kg for the three lifts – press, snatch, clean and jerk – and finished nearly 50kg clear of the Italian bronze medallist Alberto Pigaiani.

"In the early hours I watched the three colosseums, Anderson, Selvetti and Pigaiani winning gold, silver and bronze and wondered how they were able to negotiate their big abdomens," Coffa recalled.

“Of course in those days we did not have time limits between attempts and so they took as long as they wanted and I could hear their heavy breathing from the back of the hall.

"Selvetti was unlucky not to win the gold medal firstly because of his poor selection of weights and secondly because Anderson’s final lift in my opinion would have not passed today’s scrutiny as it was more a ‘push press’ than a jerk.

"But it was early morning, a world record, the last lift and we all wanted to go home, including the referees.

"I saw Selvetti again in Tokyo 1964 when I participated but by then he was but a shadow of his former self."

Selvetti weighed more than 130 kilos in his youth and was known to his friends as El Gordo {the fat one} throughout his career in weightlifting and, later, acting.

According to an entertaining account of Selvetti’s life in the Argentine newspaper Pagina12, he once pushed a car uphill on his own after it broke down, which impressed his friends even more than the time when, as a 15-year-old on the way home from watching a popular tango singer, he lifted an 80-kilo paving slab above his head.

He preferred basketball as a teenager, held a lifelong love of tango, and was not persuaded to take up weightlifting seriously until 1950.

Less than two years later, as an unknown 19-year-old, he won a bronze medal at the Helsinki Olympic Games behind the imperious Americans John Davis and James Bradford.

It was the first Olympic medal in weightlifting won by anybody from the Spanish-speaking world.

Selvetti would never win a major gold medal, and must have been fed up with losing to Americans.

His record at the 1952 and 1956 Olympic Games was bronze and silver, with only Americans ahead of him, while at the Pan American Games he was runner-up to two more Americans, Norbert Schemansky in 1955 and David Ashman in 1959.

Doug Hepburn of Canada and Aleksey Medvedev of the Soviet Union were on top of the podium when he finished third in 1953 and second in 1957 at the International Weightlifting Federation World Championships.

The Pagina 12 profile records that Selvetti "never had a problem with being fat. He loved steaks with ravioli. He never stopped drinking red wine. He did not like workouts and gained weight easily."

When he took up acting his love of food got him a role as a gangster’s side-kick who tasted all the meals, checking for poison, before the boss would eat.

Selvetti’s coach, Alfredo Pianta, tried to change Selvetti and asked him to stop singing at tango nights but that was never going to happen.

Selvetti’s popularity helped him to get behind the microphone in the clubs "although his voice was not as good as his strength."

He told Pianta he would train seriously four months before a big championship and was true to his word.

He could not commit the time for the Rome 1960 Olympic Games and at Tokyo 1964 he finished well down the field.

Selvetti was a popular figure on stage and screen, and as a celebrity strong man on television, throughout the 1960s.

A gymnasium at Argentina’s Olympic training centre in Buenos Aires is named after him.

While Selvetti, whose efforts raised the global status of South American weightlifting, never won a major gold medal several others on the list of PAWF nominees did, including Olympic champions Soraya Jimenez of Mexico and Christine Girard of Canada.

The two-hour gala at which the inductees will be presented will be conducted by the PAWF on Zoom on August 22.

Nominations from the United States are conspicuous by their absence but there will be more opportunities in future as the PAWF intends to make the Hall of Fame gala an annual event.