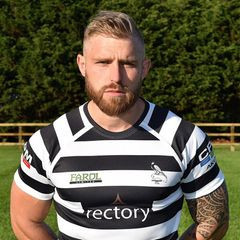 English rugby union player Greg Goodfellow has been given a two-year suspension after he tested positive for a banned substance.

Goodfellow had initially been banned for four years before the sanction was reduced on appeal.

He becomes the latest rugby union player in Britain to receive a doping ban.

A sample provided by the semi-professional player during a Chinnor Rugby Football Club squad test in February 2019 was found to have contained methasterone, an anabolic steroid prohibited in and out of competition by the World Anti-Doping Agency.

Goodfellow challenged the four-year ban handed to him by the National Anti-Doping Panel (NADP), a tribunal independent from UK Anti-Doping (UKAD) and the Rugby Football Union.

The panel agreed that he had not intentionally ingested methasterone, which was in a supplement he had taken, but that he had "acted recklessly" by failing to adequately check whether the product contained a prohibited substance.

The panel outlined six things the player "could and should have done" when deciding to take the supplement, including checking with a club doctor, his own doctor and conducting an internet search of the product.

"Instead, the respondent [Goodfellow] did none of those things and, accordingly, we find that he took a risk and manifestly disregarded the danger of doing so," the panel said.

The appeal tribunal ruled, however, that the NADP's reference to recklessness had been "confusing" and "is a term that is often misused, and further means different things in civil and criminal matters".

It added that Goodfellow did not fully acknowledge the "significant risk" that his conduct would result in an anti-doping rule violation.

The tribunal substituted his four-year suspension for a two-year ban, which began on March 29, 2019.

Goodfellow will be able to return to the sport from March 28 next year.

According to UKAD statistics, he is the 24th rugby union player in Britain currently serving a drugs ban.