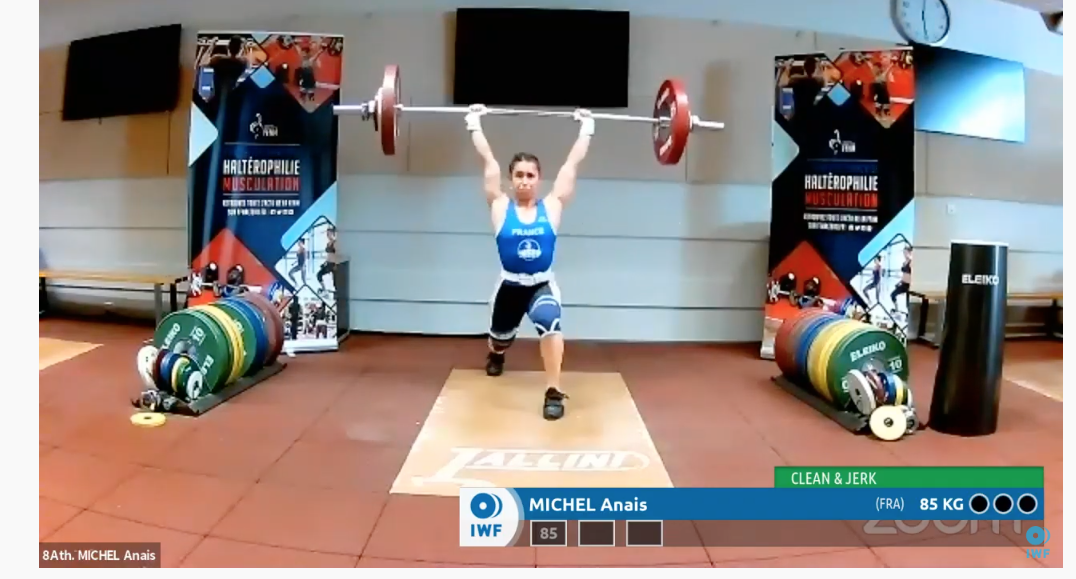 Prospective Olympians are among weightlifters from 15 countries who are competing this weekend, more than four months since the last competition on the International Weightlifting Federation (IWF) calendar.

In a landmark event organised by the Pan American Weightlifting Federation (PAWF), athletes and officials from all the sport's continental federations are taking part from the comfort of their own home or gym, or on makeshift platforms set up for the weekend.

The competition, devised in Peru, features athletes from as far afield as Uzbekistan, France, Canada, the United States and Bolivia, while officials are carrying out their jobs from New Zealand, Serbia, Nigeria, Japan, Britain and elsewhere.

The sponsors of this potentially significant competition are ZKC, the Chinese equipment manufacturer.

The first Online PanAm Cup LIVE by ZKC, to give it its full name, featured women's contests yesterday and will have men's events running today, presented and officiated on Zoom in several different time zones.

All sessions are available to watch on the IWF's YouTube channel.

Maude Charron of Canada and Yusleidy Figueroa of Venezuela, both well placed in the 64 kilograms Olympic rankings, competed in yesterday's afternoon session.

Another contender for the postponed Tokyo 2020 Olympic Games, the American Mattie Sasser, made 219kg in the 71kg category, finishing a kilogram behind Colombia's Mercedes Perez.

Both athletes went six from six.

Among today's men's events, the 73kg class features two from the top 10 in the Tokyo rankings, double junior world champion Adkhamjon Ergashev of Uzbekistan and Venezuela's Julio Mayora, who would achieve a career-best if he makes his entry total of 350kg.

The results and any records are not officially recognised but virtual medal ceremonies are taking place, and the future may feature more such competitions.

There may be no alternative for "many, many months" because of the COVID-19 pandemic, said the Peruvian José Quiñones, the PAWF President who sits on the IWF Executive Board.

"I hope this will show us a new way of doing things," said Quiñones, who started thinking about hosting an online competition in March "when the pandemic was growing and it became clear that many competitions on the international calendar would be cancelled".

In April discussions "shifted to finding ways to keep athletes motivated and focused".

"There was a common concern that a long shutdown and break from competition could seriously impact an athlete's mental health and their desire to continue training and participating," Quiñones added.

"That was the driving force in putting this together."

Further talks took place in May, when the IWF became involved.

Committee member Craig Walker, President of the Canadian Weightlifting Federation, said: "The question was never 'can we do this?', it was always 'how do we do this?'

"The practical challenges in putting this together have really been energising.

"From the very beginning the IWF was a collaborative partner in providing technical advice and making helpful suggestions.

"The systems expertise really came from Budapest and Australia.

"Once that and the collaboration with our strategic partner ZKC were in place, we were off and running.

"The focus from day one was team-work.

"Technical officials from several continents volunteered their time to review the trial runs, suggested changes to the regulations, and tested new ideas.

"I think we went through 11 drafts of the IWF technical regulations before it was finalised with modifications for the new competition format.

"We will continue to adjust this as we evolve and learn from each event."

There were rehearsals with volunteer athletes, technical officials and announcers, during which one of the more interesting problems was an athlete competing in the snatch only to miss the clean and jerk because their phone ran out of data.

Among the referees is Milan Mihajlovic, President of the Serbian Weightlifting Federation, who was "very, very happy" with the way things went on day one.

"I'm sure all national federations will be happy to compete because it's a chance not to lose young athletes," said Mihajlovic.

There were minor problems with the speed of the WiFi signal in some areas, and with broadcasting interviews – carried out beforehand by announcer Richard Mason – in between sessions, but fine-tuning will solve those.

Ensuring the athletes lift the correct weight is left to their coaches and is taken on trust.

A debrief will take place after the competition, and further online competitions will be discussed by the IWF.

The Oceania Weightlifting Federation has held online competitions for years and is organising one next weekend to tie in with the original start date of Tokyo 2020.

Oceania's success with such events was an encouragement to the PAWF organisers, said Walker.

Papandrea, a former President of USAW, said: "USAW hosted its first online competition on March 10 and has expanded to virtual camps, courses and team qualifying events.

"It is a much bigger task, though, to go international, and I am happy to see this spearheaded by the Pan American region.

"I already have plans for the next IWF event as a mixed gender teams event.

"I am glad the Pan American Federation was willing and had the courage to host this event.

"It has provided a learning ground for the IWF on the whole.

"This is a great contribution to our ability to fine-tune and work out any complications to improve upon.

"I am so glad that Nicu Vlad and the Technical Committee were willing to accommodate such activities and we look forward to our next steps to host more events as needed."