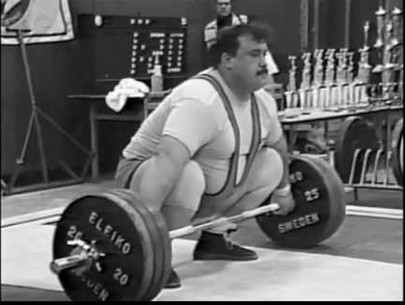 Antonio Krastev, one of weightlifting’s all-time greats who was labelled “the world’s strongest man” in the 1980s, has died in a vehicle accident in the United States.

According to the official police patrol report Krastev, 58, had driven at speed on the wrong side of the road in Mendota Heights in Minnesota, without a seatbelt, and had been drinking.

Krastev, a multiple world-record holder for Bulgaria who lived in the US and Canada since 1991, died at the scene of the crash when he was pinned underneath his SUV shortly before 3am yesterday.

In 1987 Krastev made one of the most famous lifts in weightlifting history, a snatch of 216 kilograms that has stood the test of time.

The 2012 Olympic champion Behdad Salimi, of Iran, equalled it in the plus-105kg at Rio 2016 and the winner there,  Lasha Talakhadze of Georgia, is the only man to have bettered Krastev’s snatch in international competition.

Krastev was out of luck in the Olympic Games, as Bulgaria was among the Soviet-led nations who boycotted Los Angeles 1984.

He was denied a favourite’s chance at Seoul 1988 when Bulgaria’s team withdrew because of doping offences the day before his super-heavyweight competition.

Two Bulgarians, Mitko Grubler and Angel Genchev, forfeited their gold medals when they tested positive for furosemide, which was used to lose weight and to flush away traces of  steroids.

Krastev had been favourite but the super-heavyweights was won in his absence by the Soviet Union’s Aleksandr Kurlovich, who died two years ago aged 56.

Krastev won two International Weightlifting Federation world titles, in 1985 and 1986, and was a European gold medallist in 1986 and 1987.

He was named "strongest man on the planet" by an American magazine after his 1987 world record.

Four years later he moved to North America, running gyms in New York, Toronto and most recently in Minnesota, where he also worked as a truck driver.

Krastev was totally disillusioned with the way the sport was run in Bulgaria and did not have a good relationship with Ivan Abadjiev, the coach who, he said, forced all team members to take "vitamins".

"You did what you were told," he said in an interview for Sports Illustrated in 1992.

"If you asked what they were, they would take you off the team."

By then Krastev, working as a nightclub bouncer in New York, had applied for American citizenship.

When he was delivered a message offering a chance to compete again for Bulgaria at the 1992 Olympic Games in Barcelona he did not even return the call.

"I would rather wash dishes in America than prove myself as the best in the world for Bulgaria," Krastev said.

"It’s the same people as before [in charge], the same system. I will never go back."

The police patrol report on Krastev’s crash said: “The GMC Yukon [Krastev’s vehicle] was traveling at a high rate of speed eastbound in the westbound lanes of Highway 13 when it ran a red light at Highway 55 and then failed to negotiate the curve at Furlong Ave.

"It crossed the median into the eastbound lanes then rolled off the road. The driver was not wearing a seatbelt and was ejected then fatally pinned under the vehicle.

"Alcohol is suspected to be a factor."

Artie Dreschler, the former President of USA Weightlifting who was a close friend of Krastev said: "He rebelled against the authoritarian coaching style of Abadjiev, and of his country.

"He truly loved lifting, but he valued his freedom above all, and, as so many before him had, he came to the US to find it.

"Although he did not like coach Abadjiev’s authoritarian style, he was a great believer and advocate for many of the methods Abadjiev developed, obviously convinced that in many ways his coach was a genius.

"For instance, Antonio believed in singles in almost all of his training {I only saw him do a double on rare occasions during the more than two years that I trained with him in the same gym}.

"He believed that training should almost exclusively be on the snatch, clean and jerk, and front and back squats.

"He only occasionally could be seen doing pulls, and power versions of the lifts.

"Antonio was at times a very sarcastic guy, but meant no harm with his sarcasm.

"He used it to make points he considered important.

"For instance, he often bantered with a coach from the former Soviet Union who was in charge of our gym in those years, Naum Kelymansky, who believed in the USSR tradition of great variety in one’s training exercises.

"Seeing one of Naum’s lifters perform a lift that was only remotely related to a competition lift – such as a snatch seated in a chair - he would mimic the exercise and say ‘maybe if I do this I’ll break another world record in the snatch’, with a snicker.

"Across the years Antonio trained with us, I had the pleasure of seeing him snatch 200kg on several occasions, and clean and jerk 250kg once, as he prepared for the 1996 Olympics in hopes of earning US citizenship by then, and representing the US in the Atlanta Games.

"But when he could see that his citizenship could not be gained by then, causing him to miss his third chance at an Olympic Games, he lost his drive to train and retired.

"I’m very sad to see that Antonio came to such an early and tragic end, but I’m truly grateful to have known him.

"He was a lifter’s lifter and an independent man. I’ll miss him."