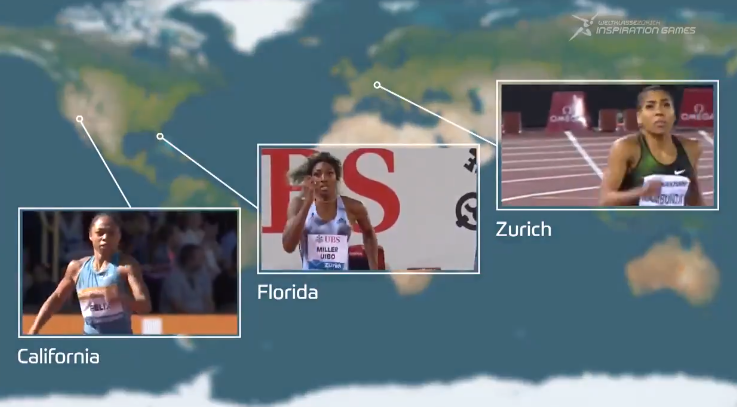 Organisers of the annual Weltklasse in Zurich are preparing for tomorrow’s staging of another international track and field event involving competitors in different venues – the Inspiration Games.

Following the success of Oslo’s Impossible Games last month, the action in the latest major event to be held during the COVID-19 pandemic will centre upon the Letzigrund Stadium.

But it will also involve, among others, United States-based talent including Olympic champions Shaunae Miller-Uibo of The Bahamas, Allyson Felix, Katerina Stefanidi of Greece, Christian Taylor and Jamaica's Omar McLeod, and world champions Noah Lyles and Sam Kendricks.

Felix - Olympic 200 metres champion in 2012 and four times a world champion over 200m or 400m - will be racing over 150m at Mt SAC’s track in Walnut, California, while Miller-Uibo, the reigning Olympic 400m champion, will cover that distance in Bradenton, Florida.

Switzerland's 2019 world 200m bronze medallist Mujinga Kambundji will compete on her home track, with the runners being connected by a live video and timing link.

"I think the idea is so cool," Felix, who returned to action last year after giving birth to her daughter in late 2018, said.

"I’m not sure what to expect, it’s the first time I’ve done anything like this.

"I’m approaching it as a way of having fun and giving people something to watch and be entertained by.

"It reinforces the importance of sport and what it can do to bring people together."

A quick reminder of the technology behind Thursday's #InspirationGames...

The 26-year-old Bahamian said: "It’s been a weird and tough year, but I think we’re all going to have some fun with this and put down some great performances."

In rare 150m appearances on straight track sections in city meetings, Felix has clocked 16.36 and Miller-Uibo 16.23.

The Inspiration Games - which are being supported by the Wanda Diamond League - will involve an added team element.

Across eight disciplines, athletes will be representing Europe, North America or the Rest of the World.

On the broadcast side, host broadcaster SRG SSR will have 20 cameras covering the competition.

There will also be a 3x100m relay, with Felix, Kambundji and the Dutch two-time world 200m champion Dafne Schippers all set to compete for their respective teams.

A three-way link-up will also be in place for a men’s triple jump and men’s and women’s pole vault contests.

"We’re athletes, we want to compete,” said Greece’s Olympic pole vault champion Stefanidi, who like Felix will be competing at the Mt SAC track.

"I train because I want to compete.

"We do it so much better under the pressure and adrenaline of competition.

"We feed off competition.

"I’m jumping really well at the moment and I want to show the world.”

Sweden’s Angelica Bengtsson will be the third athlete in the women’s pole vault, while the men’s contest will be a competition between two-time world champion Kendricks of the United States, Poland’s world bronze medallist Piotr Lisek and Valentin Lavillenie of France.

In the triple jump, multiple world and Olympic champion Taylor will renew his rivalry with fellow 18-metre jumper Pedro Pablo Pichardo of Portugal, and Pan-American champion and team-mate Omar Craddock.