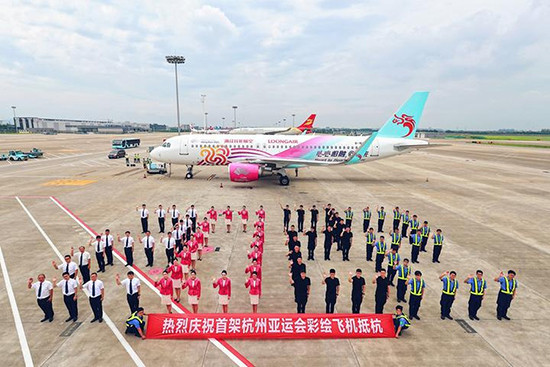 Asian Games sponsor Loong Air has unveiled a plane which has been decked out in Hangzhou 2022 livery.

The Chinese airline, which is based in Hangzhou, is a prestige partner of the 19th Asian Games.

Featured on the passenger jet are the Hangzhou 2022 logo, as well as the Games' mascots and slogans.

Both the fuselage and tail fin have been decorated.

The company has adopted the catchphrase "Fly Loong Air for amazing Asian Games" as part of its support.

It hopes to use the plane as an "ambassador" for the event, with the livery expected to raise awareness and increase excitement.

Loong Air signed its sponsorship deal with Hangzhou 2022 in November and is now one of eight prestige partners for the Games.

The airline flies to numerous cities in China, as well as to other Asian countries.