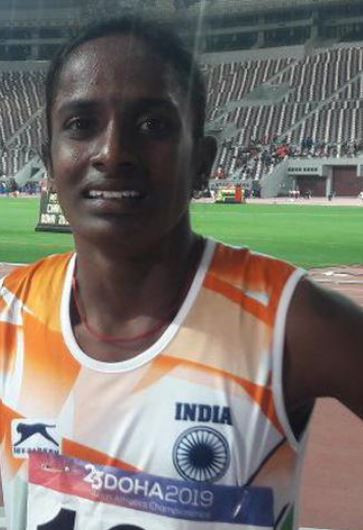 Asian 800 metre champion Gomathi Marimuthu has received a four-year ban after testing positive for the anabolic steroid nandrolone in four separate samples and has been stripped of that title.

The 31-year-old Indian triumphed in the women's 800m at last April's Asian Athletics Championships in Doha.

The panel was of the unanimous view that Gomathi did not offer any sustainable scenario for the presence of nandrolone in her samples at the level detected.

Subsequently, a four-year ineligibility period was imposed, starting on May 17 2019, when Gomathi was given a provisional suspension.

With the first positive sample collected on March 18 2019, all results between then and May 17 2019 have been disqualified, including Gomathi's victory at the Asian Athletics Championships.

We have updated our Disciplinary Process pages, including a ban for middle-distance runner Gomathi Marimuthu of India, for four-years with effect from 17 May 2020.
Find out more ⬇️https://t.co/ygInj6CKeY#AIUNews #CleanSport pic.twitter.com/tbhQ0BruMX

Gomathi is able to challenge the ban at the Court of Arbitration of Sport.

The news of Gomathi's positive tests caused anger when it was announced in May last year, with the Athletics Federation of India criticising the National Anti-Doping Authority for not notifying it of Gomathi’s positive sample from the Federation Cup held in Patiala from March 15 until 18.

The runner from Tamil Nadu, who had been on the national circuit for a number of years, surprised many observers when she won gold at the Federation Cup in 2min 03.21sec.

She went on to take her first Asian title in 2:2.70 on April 22, earning a place at the 2019 World Athletics Championships in Doha.

A number of other Indian middle- and long-distance runners have received doping bans in past months.

This includes Kiranjeet Kaur for the pre-presence and use of a prohibited substance SARM S22, an anabolic agent, and Jhuma Khatun for the anabolic steroid Dehydrochloromethyltestosterone.