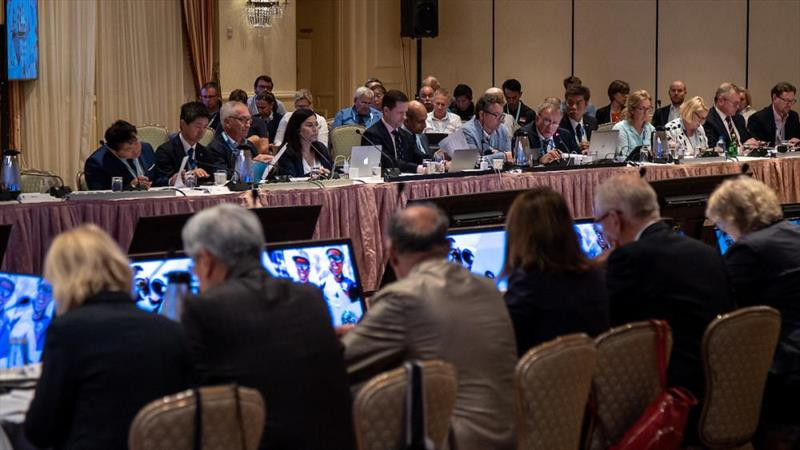 World Sailing staging a virtual Presidential election later this year has moved a step closer after the Board asked member national associations (MNAs) to vote on a resolution to hold an electronic Annual General Assembly (AGM).

A written resolution has been sent to MNAs by the Board following a report from a committee set up to assess the options for the AGM, which had been due to be hosted by Abu Dhabi in November.

The review committee recommended the AGM and General Assembly, where President Kim Andersen is set to be challenged in the election by Spanish veteran Gerardo Seeliger, be staged virtually because of the coronavirus pandemic.

MNAs have been given until June 18 to cast their vote in the resolution, which will be used if World Sailing decides to have its AGM virtually.

A decision on the status of the event is set to be made on August 1, and World Sailing is expected to give the green light to a remote election.

The document says the 2020 AGM and General Assembly - the meeting at which the election takes place - "will not be held in person".

The AGM "shall be held virtually by such electronic means as Board shall decide jointly with the Election Committee", the resolution adds.

"The proceedings shall be as valid and effective as if the meeting had been held in person," the document reads.

The committee said World Sailing "should proceed to hold its elections remotely via electronic means via the use of an independent third party".

In its report, the committee outlined its opposition to the possibility of the AGM and General Assembly being "decoupled" - split up and held separately - as it believed the elections "should not be delayed".

The committee also cited World Rugby - which had a virtual election for its chairman last month, overseen by PricewaterhouseCoopers - as an example of how the meeting can be conducted.

"With only up to 148 votes possible, we consider that it is disproportionate to delay the elections when feasible electronic solutions exist," the report said.

"Also, World Rugby has now proceeded with its elections remotely using a simple balloting solution via its auditors.

"Proceeding with the election this year will mean a number of other processes {such as Council and committee appointments} are not disrupted, and whilst there may be security and reliability concerns, these will be no greater than for the conduct of the AGM remotely itself."

Staging the AGM virtually was one of three main options considered by World Sailing under contingency plans drawn up in case the key meeting cannot go ahead as planned.

Under World Sailing's constitution, governed by Isle of Man law, the AGM must be held this year,

Travel restrictions and bans on mass gatherings imposed across the world to combat the spread of the virus would need to be lifted in order for the annual meeting in Abu Dhabi to be held in person as scheduled, which has not yet been completely ruled out.

Should approval be given to a virtual meeting by the Board, as is expected, the resolution would come into effect and would be deleted from the constitution at the end of the year.