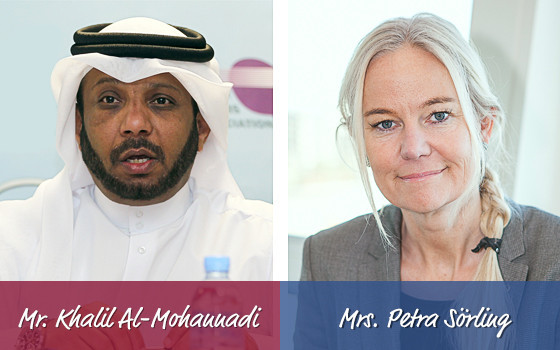 Two of the most senior officials at the International Table Tennis Federation (ITTF) have started a campaign to drum up opposition to President Thomas Weikert and find a suitable candidate to stand against him in 2021.

In a joint statement, ITTF Deputy President Khalil Al-Mohannadi and executive vice-president for finance Petra Sörling raised several concerns with Weikert's leadership and expressed their hope that he is not re-elected next year.

They claim to offer a "new direction for the ITTF membership under the leadership of a new President" in the letter, sent to members of the ITTF by the Swedish Table Tennis Association (SBTF).

Weikert announced in February that he would stand for a second four-year stint at the helm of the worldwide governing body, despite his previous insistence that he would only hold the role for one full term.

It is not clear whether either Al-Mohannadi and Sörling are considering a run at the Presidency in 2021.

Sörling declined to reveal her own intentions when contacted by insidethegames but said she would have more information after the pandemic has passed.

The SBTF President added the letter had been sent to start "internal discussions" within the ITTF and the response to the COVID-19 pandemic remained the highest priority.

Al-Mohannadi and Sörling denounced the German, elected President in 2017 but who has served in the role since 2014 after replacing Adham Sharara mid-term, for a "lack of strategical and constructive initiatives... to safeguard the ITTF from a structural and financial point of view in these difficult times".

They also claimed Weikert had placed his own interests ahead of those of the Federation.

The two officials allege Weikert has made "several moves and contacting national association representatives around the world, clearly with the aim to strengthen his own election platform, instead of following the decision making and meeting protocol of the ITTF Executive Committee".

Some may point out that Al-Mohannadi and Sörling also appear to be playing politics at a time where Federations, including the ITTF, are fighting for survival because of the pandemic and the financial implications of the decision to postpone the Tokyo 2020 Olympic Games.

The ITTF has suspended all of its events until at least July in response to the crisis, while this year's World Team Table Tennis Championships have also been postponed.

The tournament in Busan has been provisionally rescheduled for September 27 to October 4, but is likely to be pushed back again.

Weikert and senior staff at the ITTF have agreed to reduce their salary to mitigate the financial impact of the COVID-19 virus on the worldwide governing body.

When contacted by insidethegames, Weikert said he was not in a position to comment immediately but would do soon.