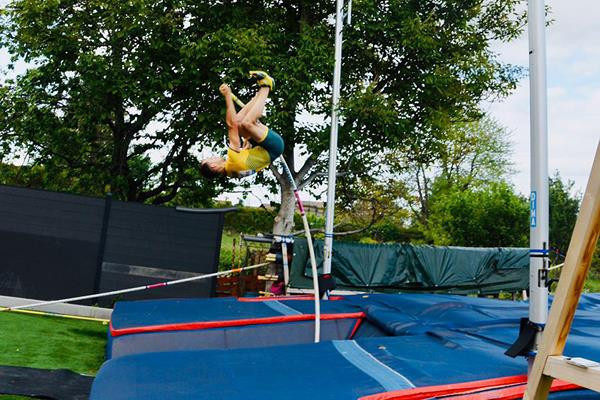 The two vaulters, along with world champion Sam Kendricks, were connected via a live video as they competed in their own back gardens to record the most number of 5.00 metres clearances in the space of half an hour – watched, according to the World Athletics commentary, by "tens of thousands" of athletics followers.

At the close of the event, which was streamed live on the World Athletics YouTube, Twitter and Facebook pages, the 32-year-old French athlete – operating at his home in Clermont-Ferrand – and his 20-year-old rival – competing in the family garden at Lafayette, Louisiana – had each made 36 clearances, with one failure each.

After a brief discussion over the possibility of an extra three-minute "jump-off", Lavillenie – whose idea the challenge was – declared with a grin: "I’m done! I don't want to take any risks! I'll share the gold with Mondo."

Duplantis, who twice broke the world record earlier this year, raising it to 6.18m, had seemed keen to continue but eventually got the message relayed and gestured his agreement.

"I will give you a revenge match, Mondo!" Lavillenie said.

Kendricks, vaulting at his family farm in Oxford, Mississippi, finished with 26 clearances.

The competition was designed to help fill the void of live sporting action caused by the COVID-19 pandemic, and consisted of two "halves" of 15 minutes.

Before the competition got underway the three protagonists were thanked for their initiative by the World Athletics President Sebastian Coe.

"Thanks for bringing us a little bit of sport back into our lives."

Kendricks commented: "When Renaud called me about this crazy idea I said: ‘If you think we can do it.’

I don’t think there are enough words to express how jealous I am of @mondohoss600 @airlavillenie and @samkendricks for getting to compete in the #UltimateGardenClash Such a great idea and so fun to watch! Thank you @WorldAthletics

At the halfway point Duplantis had 18 clearances, Lavillenie 17 and Kendricks was on 13.

Greece’s Olympic women’s pole vault champion, Katerina Stefanidi, tweeted to say that she thought the bar ought to be raised for the second half.

World Athletics are hopeful of staging similar events in the near future.