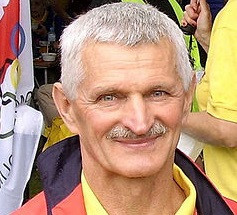 He was most recently the weightlifting coach at the United States Olympic Training Center in Colorado Springs from 2010 to 2017.

It is reported that Smalcerz was hired by the Norwegian Weightlifting Federation after attending the 2019 Weightlifting Championships in Thailand, where he met the organisation's President Stian Grimseth.

"I had no idea how old he was and was surprised to hear that he was 78 years old," Grimseth said, as reported by Sunnmørsposten.

"He has made a very good impression, not least with regard to the learning method.

"And you notice that he loves what he is doing."

Before his role at the US Olympic Training Center, Smalcerz was head coach for the Polish weightlifting team ahead of and during the Beijing 2008 Olympic Games.

Smalcerz has already begun his role as head coach in Norway but was not too impressed when he started.

"I want to set new goals for weightlifting in Norway, but there is something that I have reacted to - the weightlifting halls here are reminiscent of what we had in Poland in the 1950s and 60s," he said.

"The other thing that shocked me was that the technique was terrible.

"Fifty per cent of the lifters did not have the right technique.

"I see promising lifters, but many have the wrong technique.

Norway has only achieved one Olympic medal in weightlifting - a gold earned by Leif Jenssen in the under-82.5kg at Munich 1972.

The country did not send any weightlifters to Rio 2016.