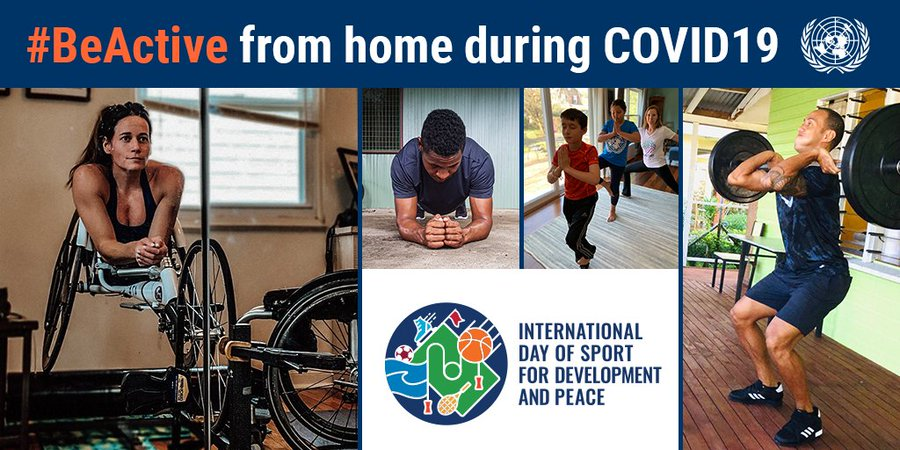 Sporting bodies and the World Health Organization (WHO) have encouraged the population to be healthy at home during the United Nations' (UN) International Day of Sport for Development and Peace amid the coronavirus pandemic.

The day has focused on the health benefits of participating in sporting and physical activity, especially during this period of uncertainty and social distancing.

Organisers asked people to be active, stay healthy and demonstrate solidarity at home due to the pandemic.

At least 1.3 million coronavirus cases have been reported worldwide, with more than 73,000 deaths recorded to date.

The WHO and the UN welcomed backing from FIFA to launch a "#BeActive" campaign on the day, which highlighted the recommendation for adults to participate in at least 30 minutes of exercise per day.

The recommendation rises to one hour per day for children.

"We are delighted that football is strongly supporting the International Day of Sport for Development and Peace by asking everyone to #BeActive and to remain healthy at home during this difficult time," UN secretary general António Guterres said.

"FIFA has asked the football community, from member associations and clubs, to players and fans, to show their support, to put their rivalries aside and to show a new solidarity so we can overcome the coronavirus.

"This is an important lesson not only for today, but for every day."

The video highlights that "even rivals need to stick together" during the crisis and highlights the importance of remaining active.

"More than ever, especially now, one thing must be clear to everyone, health comes first," FIFA President Gianni Infantino said.

"FIFA is delighted to support both the United Nations and the World Health Organization in amplifying the #BeActive campaign today, and we are encouraged that the football community is also playing an active role in ensuring the message understood globally.

"For the first time ever, we are all on the same team and together, with team spirit and positive energy, we will win."

International Olympic Committee (IOC) President Thomas Bach yesterday featured in a video message to mark the day, where he called for people to remain united during the crisis.

Bach also claimed the postponed Tokyo 2020 Olympic and Paralympic Games would act as a "festival of resilience" for when the world emerges from the crisis.

A symbol of hope and global solidarity, and the power of sport.

The IOC President said today in a tweet: "Pope Francis has put it best. 'In this period, many demonstrations are suspended, but the fruits come out best in sport: endurance, team spirit, sport brotherhood, giving the best of oneself.'"

International Paralympic Committee President Andrew Parsons was among numerous officials to raise a white card on the day.

Peace and Sport's white card campaign is designed to symbolise a message of hope and solidarity.

World Karate and World Taekwondo were among the governing bodies to participate in the campaign on social media.

Paris 2024 President Tony Estanguet and fellow IOC members Sergey Bubka and Nicole Hoevertsz were among others to support the initiative, along with Global Association of International Sports Federations President Raffaele Chiulli.

"We may be distanced by circumstance, but humankind is more united than ever before in our joint effort to remain strong and positive during these challenging times", Chiulli said.

The organisation highlighted how National Olympic Committees had promoted the message of the day across their digital platforms today, as well as athletes acting as role models in their communities for by keeping active.

“The world is currently facing great challenges and uncertainty and therefore it is of paramount importance that we continue to encourage solidarity and promote the Olympic values," said Robin Mitchell, Acting ANOC President .

“COVID-19 overlooks all societal barriers, it does not see borders between countries or continents; it does not recognise ethnicities or beliefs; it affects all of humanity in the same way.

"Amidst the awful pain and damage caused, this pandemic does remind us that there is more that unites us than divides us.

“We are all in this together and we must support each other in the best way we can.

"We will continue to fight this common enemy by following the guidance of our national authorities and continue to protect our physical and mental health by remaining active, even when movement outside our homes is restricted.

"IDSDP is an important milestone in promoting our shared values and we welcome all the engagement we have seen from NOCs around the world during these difficult times.”