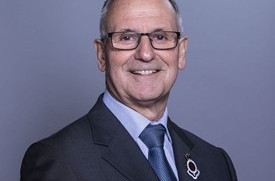 After an 18-year tenure with World Rugby, Griffiths joins the IWRF after previous involvement in wheelchair rugby, which saw him form a partnership between the two bodies in 2010.

Griffiths retired from the body in 2016, but remained involved in assisting the IWRF over the past four years.

IWRF President Richard Allcroft praised the work of Griffiths and said: "Having an individual with Steve's calibre will shape the direction of the sport over the next several years.

"We have already shared ideas, and I know that he is looking forward to starting, in particular, evaluating and understanding the organisation fully."

The IWRF is pleased to announce that it has appointed Steve Griffiths as its CEO. Griffiths diversified experience, passion, and professionalism will be a tremendous asset to the IWRF and its membership when he officials starts on Monday, April 6. https://t.co/3tLrg6CXKe pic.twitter.com/S4hNBMOoIS

Griffiths stated his humbleness over his new position and hopes to develop wheelchair rugby further.

He said: "It is a great honour and privilege to become chief executive officer of the IWRF at an interesting time in the development of the sport.

"There will be significant challenges as I join at an unprecedented time with all sport being affected by the COVID-19 virus, including the postponement of the Paralympic Games for the safety of athletes and all involved.

"Having worked closely with the organisation in an advisory capacity since 2010, I am looking forward to join what I know is a great sporting family, and trust that I can contribute to delivering the goals set out in the 2019-2024 strategic plan."