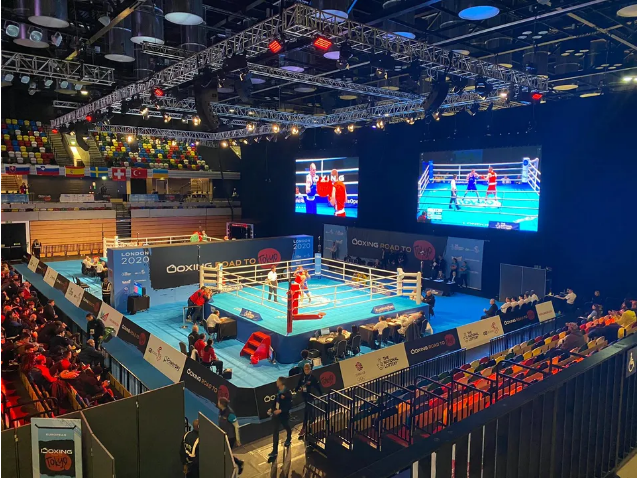 The European qualifier, which started on Saturday (March 14) and was planned to run until March 24, closed after this evening's session.

The announcement comes after the event, being held at the Copper Box Arena, moved behind closed doors as of today due to the coronavirus pandemic.

"Safeguarding the well-being of the athletes, officials and all other participants is a top priority for the BTF," an IOC statement reads.

“Since the preparation phase of the event, the BTF has been working in close cooperation with the Local Organising Committee – the delivery body of the competition – as well as its stakeholders, its own medical experts and the national health authorities, to set up the necessary precautionary measures.

"The BTF eventually took the decision to suspend the event today, amid increasing global travel restrictions and quarantine measures, in order to allow the participants from over 60 countries to adjust their travel plans and return home.

"The BTF will continue to evaluate the situation daily, aiming to complete the distribution of the remaining Tokyo 2020 boxing quota places in May and June.

"The BTF’s priority remains the qualification of athletes on the field of play, and it will inform all stakeholders as soon as more information is available."

The IOC also reiterated it is fully committed to the success of this year's Olympic Games in Tokyo.

"The BTF would like to thank the host nations, the Organising Committees and all the participants involved for their support and tremendous efforts in dealing with this extraordinary situation," the statement concludes.

The decision comes on a day when British Prime Minister Boris Johnson advised against mass gatherings amid the coronavirus pandemic, effectively cancelling all remaining sporting events.

Johnson said that from tomorrow, mass gatherings requiring emergency workers are something "we are now moving emphatically away from".

Today's action at the European Olympic Qualifying Tournament, organised by the BTF following the suspension of the International Boxing Association last year, saw the first spots at Tokyo 2020 be awarded.

With eight places available in some weight classes, boxers only have to reach the quarter-finals to qualify, so in this evening's session a win for those in the men's flyweight and men's featherweight categories was enough.

Great Britain's Galal Yafai became the first boxer from Europe to qualify for Tokyo 2020 after reaching the last eight of the men's flyweight event with a unanimous points decision over Russia's Rasul Saliev.

"It's my second Olympic Games - I'm over the moon, just to get there it's took a long four years," Yafai, who competed at Rio 2016, said.

"The first time I qualified for the Olympics didn't feel as sweet as this one."

Also through to the quarter-finals and securing a place at Tokyo 2020 was fourth-seeded Spaniard and 2019 European Games gold medallist Gabriel Escobar Mascuñano, who ran out a deserved winner over former world bronze medallist Dmytro Zamotayev of Ukraine via a unanimous points decision.

Among those taking Tokyo 2020 berths in the men's featherweight division were top seed Peter McGrail of Britain and third seed Mykola Butsenko of Ukraine, after claiming comfortable wins over the Czech Republic's Kevin Godla and Armenia's Artur Bazeyan respectively.

McGrail will next meet Hungary's Roland Galos, while Butsenko will go up against Spain's José Quiles Brotons.