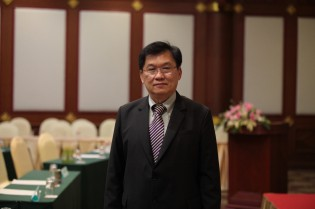 A new leader who has taken charge of weightlifting in Thailand has pledged to lead the nation to success in a clean future, but doping-related issues were immediately top of the agenda after his election as president of the Thai Amateur Weightlifting Association (TAWA).

Prachaya Keeratinant was unanimously elected as President of TAWA after the surprise late withdrawal of the favourite, Major General Intarat Yodbangtoey.

For many years weightlifting in Thailand - which is banned from the Tokyo 2020 Olympic Games because of multiple doping offences - has been run by Yodbangtoey and his wife Boossaba, the outgoing President.

Boossaba Yodbangtoey and her entire Executive Board resigned in late January, three weeks after the broadcast of a German television documentary that claimed doping was widespread in Thai weightlifting.

In the run-up to the TAWA elections last week, Intarat Yodbangtoey, honorary President of TAWA and first vice-president of the International Weightlifting Federation (IWF), announced that an independent investigation into allegations made in the documentary had not proved any wrongdoing.

Yodbangtoey said that there had been insufficient evidence against Siripuch Gulnoi, a London 2012 medallist who was tricked into talking to a reporter who posed as a weightlifting manager from Germany.

Gulnoi, whose name was Rattikan in 2012, was recorded saying she had “a jaw like a man and a moustache” when she was doping as a teenager, but “those responsible couldn't care less about health”.

None of her comments could be taken as hard evidence, Yodbangtoey announced, because the programme makers ARD had not provided Thai investigators with original footage of the conversation, and because Gulnoi had been tricked into talking.

“The evidence is not enough to prove that [Gulnoi] intended to communicate as claimed because the investigation committee has not received the original video clip,” Yodbangtoey said.

He also said that Gulnoi herself had been tested 23 times without ever coming up positive, and that nearly 600 samples had been taken over a three-year period from the 2,560 registered weightlifters in Thailand, with no adverse findings.

That was Yodbangtoey’s final announcement before he withdrew from the TAWA election in Bangkok, which was attended by representatives of the Sport Authority of Thailand.

Four days after the election of Keeratinant, who has been general secretary and treasurer of TAWA in the past, elite young weightlifters were tested on their knowledge of anti-doping procedures by Thailand’s National Anti-Doping Agency (DCAT).

Meechai Inwood, director of DCAT, and his staff visited the national weightlifting team headquarters in Chiang Mai to educate athletes about prohibited substances and to introduce them to a new online anti-doping learning programme.

Thailand voluntarily withdrew from international competition because of the scandal, and despite an attempt to return, is excluded from Tokyo 2020.

Those positives - and another scandal involving young dopers in 2011 - had already damaged Thailand’s standing in the sport before the TV documentary which, said Boossaba Yodbangtoey, had "destroyed our country’s reputation and image".

Keeratinant’s task is to restore that image and bring further success to a nation that has won more medals in weightlifting than in any other sport at the Olympic Games, and has had athletes on the podium at every Games this century.

The task for Paula Aranda, the new chairman of the board at USA Weightlifting (USAW), is more straightforward.

Aranda too is replacing a predecessor who resigned, but in this instance it was because the incumbent Ursula Papandrea was elected acting President of the IWF while Tamás Aján stands aside during an investigation into allegations of corruption raised in the same German TV documentary.

Papandrea’s place as chairman of USAW was held on an interim basis by Jenny Schumacher until the election last week, which Aranda won.

At 34 she becomes the youngest chairman in USAW history, and the third successive female to occupy the post.

Aranda, who was 29 when first elected to the board, also sits on the IWF’s Development and Education Commission, which she joined in 2018.

She is a bilingual, with family roots in South America, and was a national-level weightlifter before she became a board member.

Aranda, from Seattle, has worked for big tech companies Amazon and Microsoft in trade compliance roles and said, “I firmly believe in well-written policies and rigour around compliance, efficient processes and transparency.”

A perceived failure in those areas is being addressed by Papandrea and her IWF Executive Board, which is due to meet in Lausanne next week.

“I am looking forward to the challenge of leading USAW during a difficult and dynamic time over the next several months,” said Aranda, whose first term runs until the end of this year.

She said she was working with “a terrific board, whose wide variety of backgrounds celebrates diverse thinking, transparency and inclusiveness in approaches to issues… We hold each other accountable to the highest standards.”

Aranda’s experience as a national-level athlete “helps me understand the athlete experience”.

She pointed out that 60 per cent of the board had competed at a high level and reiterated USAW’s “commitment to putting the athlete at the heart of everything we do and every decision we make”.

Aranda added, “I hope that other up-and-coming professionals consider giving back to the sport by volunteering in a variety of roles and seeking involvement in the Federation level too.

“My work on the IWF Commission will continue to support countries with new weightlifting programmes or programmes that are having difficulty getting established.

“Weightlifting is truly for all, and I love supporting this mission of our Commission.”