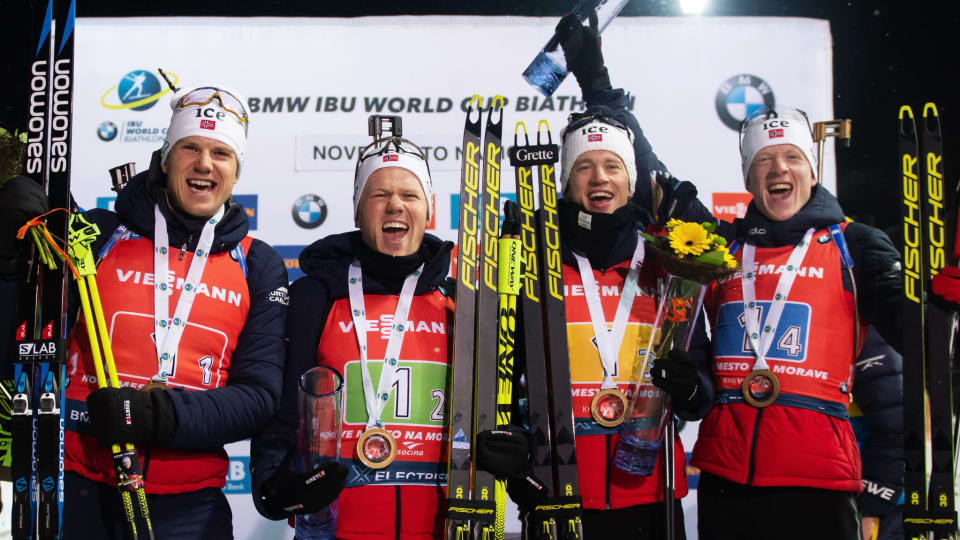 Victory secures Norway the IBU World Cup title for men's relay, finishing on 348 points from the six events ahead of France with 302 and Germany with 264.

"(Winning) meant a lot," Johannes Thingnes Bø, who used just 10 shots to close his 10 targets, said.

"We wanted to win the relay cup so this was our big aim today.

"My team put me in a good position but here in Nové Město you never know with the wind so I tried to keep the distance until my last shoot.

"Then when I did not use extra shots, I could take time to relax on the last loop."

The bronze medals went to Sweden's Sebastian Samuelsson, Jesper Nelin, Peppe Femling and Martin Ponsiluoma, who were 43.3 seconds back with one penalty and eight spares.

All three teams fought hard for this and Norway🥇, France🥈 and Germany🥉 thoroughly deserve their awards in the #NMNM20 women relay! You can watch the race replay on https://t.co/MSJYx30KUx pic.twitter.com/jo1MrrHr73

Earlier today in the women's 4x6km relay, the Norwegian team made it a perfect six wins out of six this season.

The 22-year-old found herself on top of the podium in her first-ever IBU World Cup start.

"This is a day that I will never forget," Lien said.

Rounding off the podium were Germany's Karolin Horchler, Vanessa Hinz, Franziska Preuß and Denise Herrmann, 57 seconds back with one penalty and 14 spares.

The event in Nové Město na Moravě has been closed to the public because of the coronavirus outbreak.

Action is due to conclude tomorrow, with the men's 15km and women's 12.5km mass start competitions.