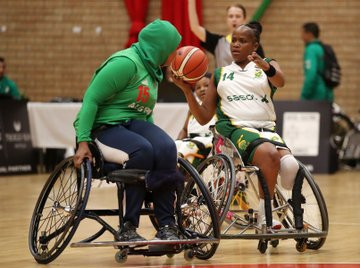 Algeria's women's team are one win away from securing their place at Tokyo 2020 after beating hosts South Africa for a second time at the International Wheelchair Basketball Federation (IWBF) Afro Paralympic Qualifiers in Johannesburg.

The Algerians followed up yesterday's 53-33 win by claiming a 57-24 victory at Vodacom Mandeville Indoor Sports Center.

The two countries are competing in a five-match series to determine the qualifier for Tokyo 2020, and another win for Algeria tomorrow will seal their passage.

In the men's event, South Africa overcame a 12-point deficit in the last quarter to register a hard-fought 62-60 victory over Algeria and make it two wins out of two in the single round-robin group.

Second-placed Algeria are joined on a record of one win and one loss by Morocco, who defeated Egypt 67-52 today.

The @SasolSA Amawheelaboys overcame a 12 point deficit in the final quarter to claim a hard-fought victory over Algeria.

That was brilliant from our boys! 🇿🇦 #2020APQ #Limitless pic.twitter.com/LnBCUPam2e

All four teams will advance to the semi-finals, with the group winner facing the team bottom of the standings.

The semi-finals are due to take place on Friday (March 6), with medal matches scheduled to be held the following day.

Wheelchair basketball faces the threat of being removed from Tokyo 2020, however.