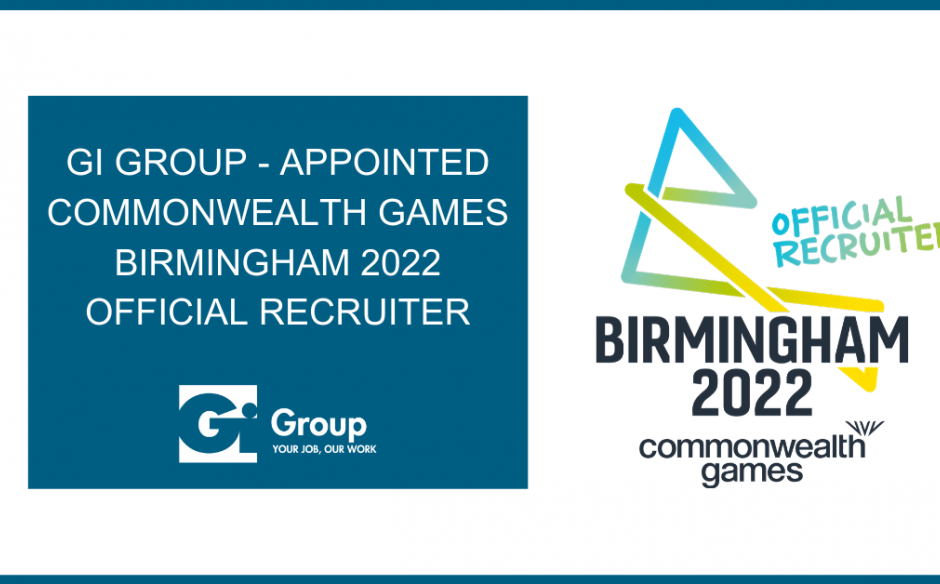 Gi Group has been appointed as the official recruiter for the 2022 Commonwealth Games in Birmingham, becoming the second sponsor of the multi-sport event.

The employment agency will help find 1,000 people over the next two-and-a-half years to join the team planning and delivering the biggest sports and cultural event ever to be held in the West Midlands.

One of the world’s leading companies for the development of the labour market, Gi Group UK has operated for more than 30 years and is active in numerous human resources service markets, including temporary, permanent and professional staffing, search and selection, outplacement, training and payroll services.

The company, which already has a team based in Birmingham 2022’s city centre headquarters in Brindley Place, will deliver end-to-end recruitment services for the organisers of the Commonwealth Games.

This includes job profiling, on-boarding and an outplacement programme which will assist all Birmingham 2022 staff with finding their next career move from August 2022, once the Commonwealth Games are over.

It leads on key areas such as the sports programme, venue management, transport, security, marketing and public relations, ticketing, the volunteer programme, the cultural programme and the Opening and Closing ceremonies for the Commonwealth Games.

"We are extremely pleased to have Gi Group on-board as our official recruiter," Birmingham 2022 chief executive Ian Reid said.

"We’ll be appointing more than 1,000 people over the next two-and-a-half years which is a huge task, so it’s fantastic that we now have an experienced recruitment partner and a dedicated team in place.

"Gi Group are already working very closely with our HR and recruitment team, ensuring that each functional area of our business gets the support it needs to bring on board the best possible people to help us deliver an outstanding Commonwealth Games."

Reid added: "We’re adding vacancies to our website every single week, so there’s lots of exciting opportunities to apply for right now.

"We are already employing scores of people from across the West Midlands and we’d love more local people to join the team, so they can be part of this once-in-a-lifetime opportunity to showcase their region to the world."

Paulo Canoa, country manager for Gi Group UK and Ireland, has been involved from the outset of discussions and negotiations with responding to Birmingham 2022’s resourcing needs and requirements.

"As a keen sportsman myself and a former professional basketball player, this is hugely exciting for me personally," he said.

"Being ultimately chosen as the professional recruitment process outsourcing services provider, and particularly for what is providing one of the most critical aspects, the people resource, of such a historical and popular sporting event as the Commonwealth Games, makes me extremely proud of the talented team we have in place across the Gi Group of companies."

CGF chief executive David Grevemberg added: "We are delighted to see Gi Group partner with Birmingham 2022 as the official recruiter for the next Commonwealth Games.

"Birmingham 2022 will be a transformational event for the West Midlands, the UK and the entire Commonwealth, and every single person working to make the Games a success has a unique opportunity to be part of something very special.

"Gi Group will play a critical role in helping secure the very best people to deliver a fantastic Commonwealth Games."

In August of last year, international law firm Gowling WLG was announced as the first official sponsor of Birmingham 2022.

The company are the official legal advisers to the Commonwealth Games, due to take place in the English city between July 27 and August 7.