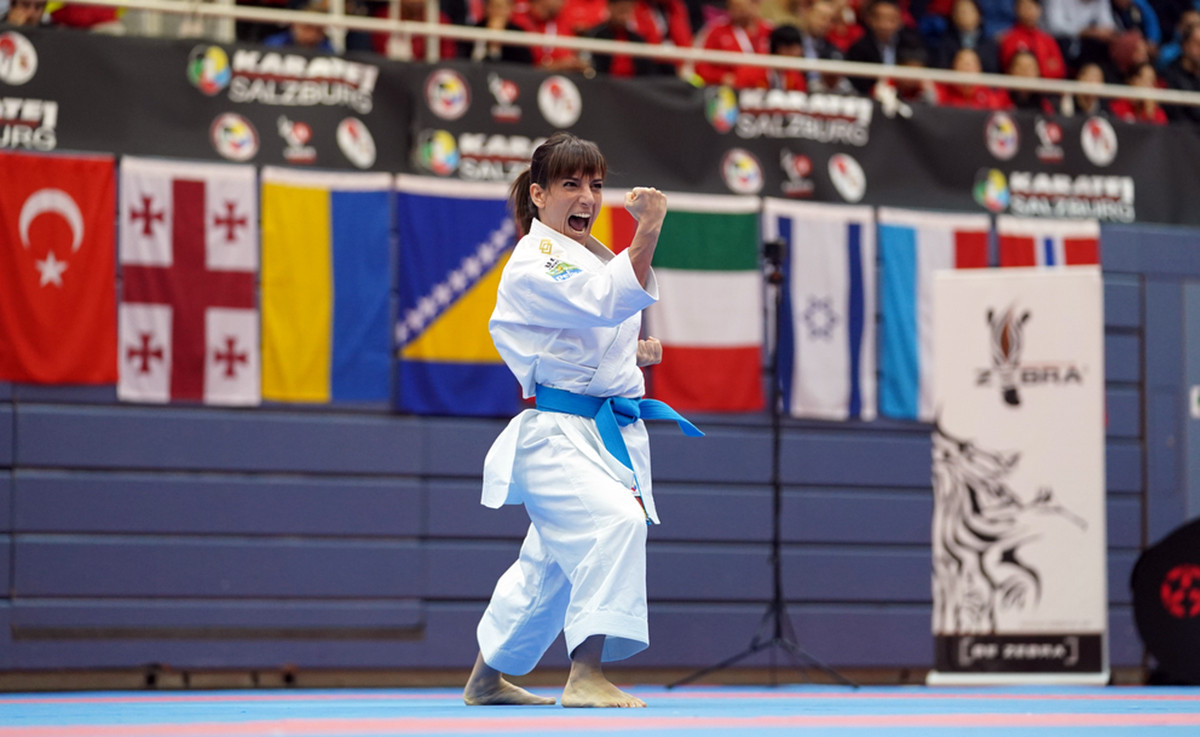 Sandra Sanchez continued her 100 per cent winning record at Karate 1-Premier League events this season by winning the women's kata category at the third round in Salzburg in Austria.

In a repeat of the final from the previous Premier League event in Dubai, Sanchez faced Sakura Kokomai of the United States, and again it was the Spaniard who came out on top as she excelled with "Chatanyara Kushanku" kata scoring 27.38 points compared to 25.4 for her opponent.

Sanchez was one of two Grand Winners to top the podium at the Sporthalle Alpenstrasse Sports Hall in Salzburg, with the other being Uğur Aktaş of Turkey in the male Kumite-84 kilograms category.

Aktas was due to face world champion Ivan Kvesic in the final, however the Croatian was unable to start the final because of injury handing victory to Aktas.

It was a good day for Japanese karatekas with the men's kata final going to Kazumasa Moto who performed a flawless "Gankaku" kata and scored 27.48 points to defeat Ali Sofuoğlu of Turkey.

There was more success for Japan in the female Kumite under-50kg as world title holder Miho Miyahara defeated Spain's Nadia Gomez Morales 2-0 in the final courtesy of scoring two yukos.

In the male kumite under-75kg category the current world champion in that discipline Bahman Asgari Ghoncheh of Iran beat Stanislav Horuna of Ukraine via an Ippon score inside the final 10 seconds of the contest.

There was an upset in the male Kumite -60kg category as world champion Angelo Crescenzo of Italy was defeated by Emil Pavlov of North Macedonia.

The bout was tight going into the last minute before Crescenzo took the lead with a Wazi-ari however Pavlov turned things around in the last few seconds by scoring an Ippon.

In the female Kumite under-55kg category Sara Cardin of Italy edged out Jana Messerschmidt of Germany 3-2, with the former world champion winning by a final Yuko.

Hamideh Abbasali of Iran managed her second Premier League win of the year in the female Kumite over-68kg category beating Clio Ferracuti 2-1 via a Waza-ari.

In the rest of the bouts, Rafiz Hasanov of Azerbaijan defeated Luca Maresca of Italy 3-1 in the final of the Male Kumite under-67kg, Merve Coban of Turkey edged Haya Jumaa of Canada by “Hantei” or decision in female kumite -61kg while Ryzvan Talibov of Ukraine beat Brian Irr of the US 3-1 in the male Kumite over-84kg to claim his first ever title in international competition.

Spain and Turkey took the crowns in team kata.

Round four of the Karate 1-Premier League is scheduled to take place at Rabat in Morocco from March 13 to 15.