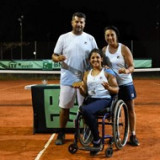 Chile's men and Argentina's women came through the Americas qualifier in Buenos Aires, and South Africa's men and Morocco's women were successful at the African event in Nairobi.

All four nations can now look forward to the event at the Vilamoura Tennis Academy in Portugal in May.

The Chilean men will contest the tournament for the second time after their 2-0 victory over Colombia in the final.

They will join their men in Portugal who were already assured of their place after reaching the semi-finals of last year's World Team Cup.

South Africa's men won their qualifier for the second straight year after a 2-0 win over Morocco in the final.

In the women's event, Morocco won their final 2-0 against hosts Kenya to book a second World Team Cup appearance.

The Asian and European qualifiers will take place next month.