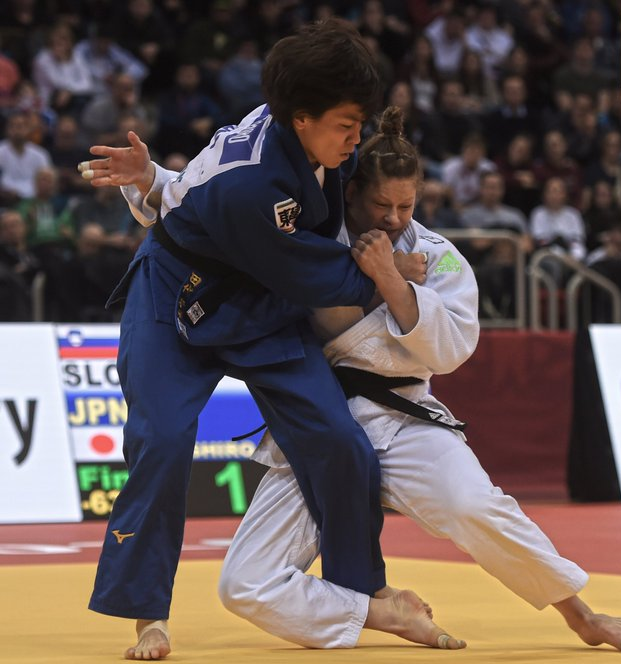 The Japanese team secured a hat-trick of gold medals at the ISS Dome in the German city yesterday, with a further three coming today.

Miku advanced to the women’s under-63kg final contest courtesy of a triumph over Austria’s Kathrin Unterwurzacher via an ippon score.

She repeated the feat against Trstenjak in the final by pinning the reigning Olympic champion to seal victory.

Unterwurzacher was unable to bounce back from her semi-final defeat as the Austrian was beaten by Cuba’s Maylin Del Toro Carvajal in the first bronze-medal bout.

Japan’s Chizuru Arai, a two-times women’s under-70kg world champion, was also among the winners in Düsseldorf.

Arai overcame Belgium’s Gabriella Willems in the final by forcing a single waza-ari score after a close contest.

The home crowd were able to celebrate a bronze medal for Giovanna Scoccimarro when she overcame South Korea’s Kim Seong-yeon with an ippon score.

An Changrim seemed to have figured out Ono’s Uchi Mata until a beautiful twitch fooled the Korean and opened up just enough space to attack - Masterful Judo! Another Gold for Ono, Is there anyone that can beat him?#JudoDüsseldorf #Judo
©️IJF Media Team - Robin Willingham pic.twitter.com/YRfm53qGgO

A third Japanese title was secured by reigning world champion Shohei Ono as he beat South Korea’s An Chang-rim through a waza-ari score in the men’s under-73kg final.

The focus was on Mongolia's Saeid Mollaei in the men’s under-81kg event, after he defected from Iran after last year’s World Championships in Tokyo.

Mollaei claimed he had been threatened, with Iranian officials allegedly instructing him to lose at the Championships to avoid facing Israel's Sagi Muki.

The incident has led to the suspension of the Iranian Judo Federation.

Mollaei’s bid for victory in Düsseldorf was ended in his fourth bout by Russia’s Olympic champion Khasan Khalmurzaev, while he also lost a repechage contest to miss out on a potential bronze medal.

Khalmurzaev advanced through to the gold-medal bout, but was shocked as Georgia’s Tato Grigalashvili achieved a waza-ari score to win the event.

Bronze medals were earned by The Netherlands’ Frank De Wit and Sweden’s Robin Pacek, after they overcame Kyrgyzstan’s Vladimir Zoloev and Germany’s Dominic Ressel in their respective bouts.