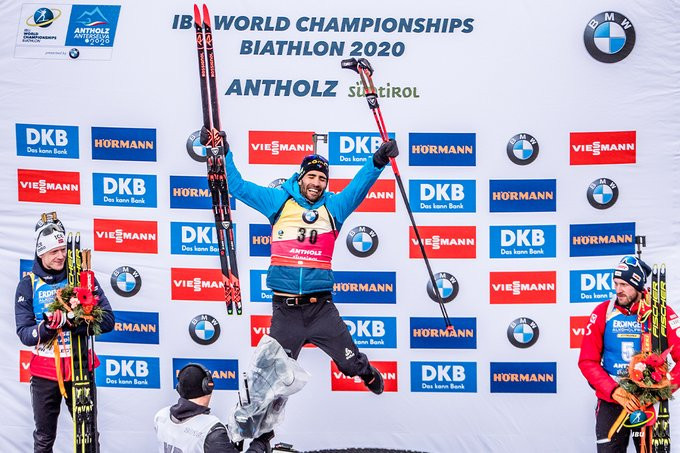 The five-times Olympic champion produced a dominant display to move level with Norwegian legend Ole Einar Bjørndalen on 11 world titles and clinch his first gold medal at the event since 2017.

Fourcade cruised to victory in a time of 49min 43.1sec, 57 seconds ahead of Norwegian rival Johannes Thingnes Bø in second.

Dominik Landertinger of Austria came through to take bronze, 1:22.1 adrift of the formidable 31-year-old Frenchman, whose only blemish was a failure to hit the last of 20 targets.

Fourcade's victory saw him equal the all-time World Championships record and ended a barren run at the event, which stretches back three years.

He has now won 27 World Championships medals, including bronze in the 10km sprint in the Italian resort last week.

Fourcade will surpass Bjørndalen, who retired in 2018 and now coaches the Chinese national team, if he triumphs in the mass start on Sunday (February 23).

"Last season as you know was really difficult for me," Fourcade said.

"I am so proud that I succeeded to be back and to fight against my doubts, my nightmares.

"Today being world champion means a lot for me, probably much more than any time before.

"I never started biathlon to make history, I did it to be in the forest with my family.

"But when you make it, you have to be proud of it and I am."

The World Championships continue with the single mixed relay tomorrow.