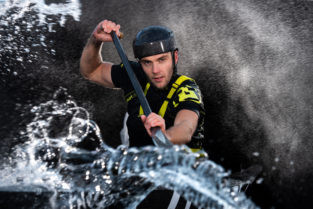 Canoe slalom racer Liam Jegou has become the first athlete to be selected for Ireland's team for this year's Olympic Games in Tokyo.

Originally from Ballyvaughan in County Clare, Jegou has already stamped his mark on the international stage, winning silver at the 2014 World Junior Championships in Penrith in Australia and bronze at the 2019 World Under-23 Championships in Polish city Kraków.

The 24-year-old will compete in the C1 category at Tokyo's Kasai Canoe Slalom Centre on July 26 and 27.

Jegou will become the second Irish athlete to compete in the C1 canoe slalom event at the Olympics, with the only other being Mike Corcoran, who last competed at Atlanta 1996, the year in which Jegou was born.

He has vowed to seize his opportunity at Tokyo 2020.

"Being an Olympian has always been one of my biggest dreams," Jegou, who is based in France, said.

"The past month has been unbelievable knowing that I am going to compete for Team Ireland in the Olympics.

"In my sport the Olympics is everything, it’s what everyone works for in their sport.

"It’s such a select thing; there’s only one athlete per nation that gets to go and when you get to go you just want to give it your all.

"Most people only get to go to the Games once or twice in their lives, and I’m certainly not going to let the opportunity pass me by."

Tricia Heberle, the Olympic Federation of Ireland's Chef de Mission for Tokyo 2020, added: "It’s very exciting, this is our first athlete to be approved as part of Team Ireland for the 2020 Olympics – it’s great for the sport and great for Liam.

"There is a tremendous amount of work that goes on behind the scenes to support sports and our athletes to qualify and perform at the Games.

"It’s a real team effort with our National Federations, the Sport Ireland Institute and a range of other support groups working together with the athletes as our priority.

"Liam has his own story and we are so pleased to be supporting the next chapter in his journey as he prepares for the Tokyo Olympic Games."

Jegou was nominated for the Tokyo 2020 slot after finishing on top in the three-race selection criteria, which included last year's World Championships in Spanish town La Seu d'Urgell.

That was the event in which Ireland qualified the coveted Olympic berth courtesy of Robert Hendrick, another talented Irish racer.

Ireland has a rich history in K1 canoe slalom, with Ian Wiley and Eoin Rheinisch competing in the event for three Olympic Games each between 1992 and 2012.

Eadaoin Ní Challarain was the first Irish female canoe slalom racer, competing in the K1 at Sydney 2000 and Athens 2004, and Hannah Craig also raced in the event at London 2012.

This is the first official Team Ireland announcement for Tokyo 2020.

Many sports have ongoing selections and competitions, with further announcements expected more frequently in the coming months.

The final announcement is scheduled for the beginning of July.