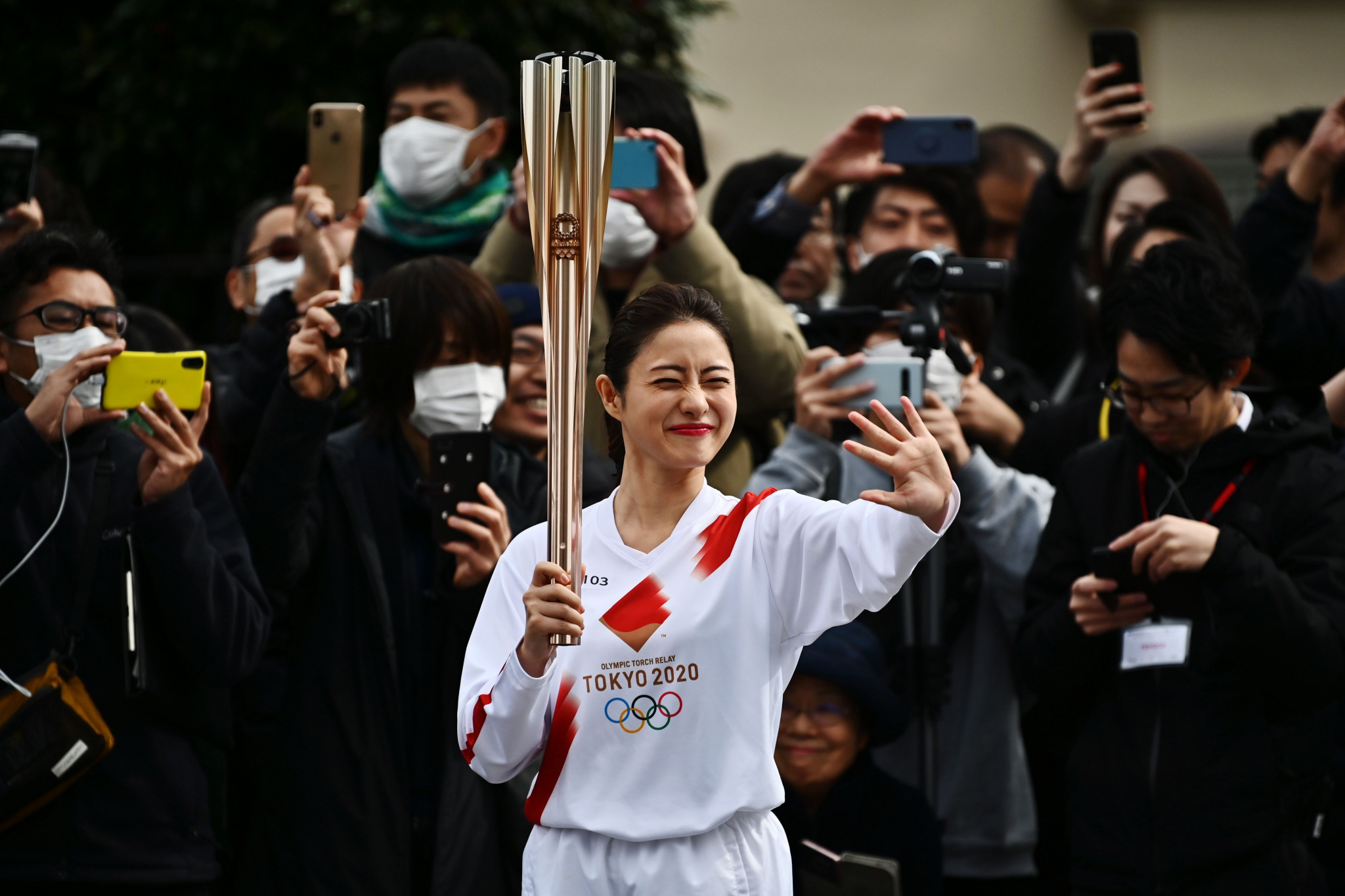 Runners wore the official red and white Torchbearers uniform for the event, designed to test readiness for the 121-day domestic relay which begins on March 26.

Roads were closed and police and security lined the routes for a event organised by Tokyo 2020 in association with Tokyo Metropolitan Government’s Torch Relay task force.

The relay segments also featured some of the support vehicles which will accompany the Flame across Japan.

Hundreds of spectators had taken to the streets to watch, but a number wore face masks amid concern over coronavirus.

The day began at the Hamura City Sports Center, some 45 kilometres west of the Tokyo metropolitan area.

Stand-in performers also rehearsed the departure ceremony which will be held at the start of each day.

Ishihara, a Tokyo 2020 Torch Relay ambassador, was one of four runners to carry the torch in the morning portion of the practice.

She waved to spectators and ran with a security escort who wore dark blue Tokyo 2020 tracksuits.

Ishihara also struck one of the torch ‘’poses’’ recommended by Tokyo 2020 in its promotional videos as she used her empty torch to mime the exchange of the flame or ‘’kiss’’ with the next runner.

"I was very nervous before running but it went by so fast," Ishihara said.

"I am really glad I was able to rehearse ahead of the Torch Relay because I ended up running too fast today.

"I am sure it will leave behind a lot of good memories."

In the actual Torch Relay, this portion of the route will be run on July 13.

Some delays had been reported at the start of the event.

"This will be the first and the last time we will do it.

"We want to check every aspect so this is an important opportunity."

That is the theme of the #Tokyo2020 #TorchRelay as we want to inspire hope and bring the people of Japan and the world together.🙌

Official Ambassador Satomi Ishihara wants you to show your support during the Olympic flames’ 121-day journey around Japan. 🇯🇵 pic.twitter.com/ERK5Jc1AMs

It started at a stone monument before being taken along a 350 metres walking trail known as the Kokubunji Cliff Line or “Hake”.

The third and final section was held in Hachioji City where Taguchi, executive director of the Paralympians Association of Japan also carried the torch.

Organisers also had a chance to practice the ‘’celebration’’ events which will be held at breaks in the relay and at the end of each day.

A special celebration community cauldron will be lit each night at every stopover.

The Torch Relay itself is expected to involved some 10,000 runners on Japanese soil.

It is by no means the first time that a dry run for the torch relay has been held.

A few days before the 1964 Olympics opened in Tokyo, the public were invited to watch rehearsals of the Opening Ceremony.

This even included the lighting of the Cauldron by teenager Yoshinori Sakai, who famously performed the task at the ceremony itself.