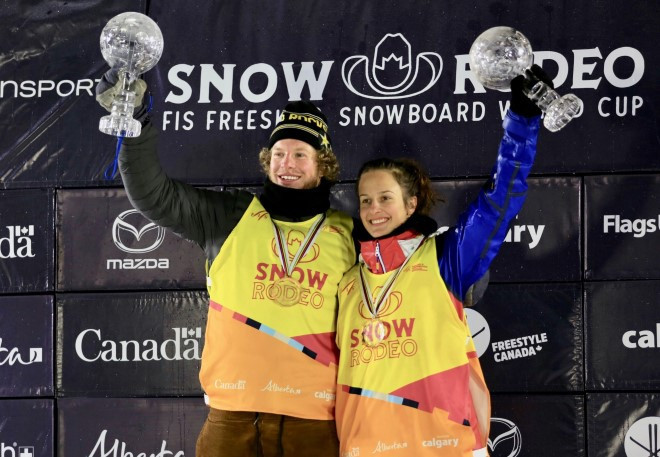 China's Gu Ailing Eileen won the women's event in the Canadian capital, while Britain's Gus Kenworthy - who was entering his first World Cup competition for more than two years - was the men's victor.

The 16-year-old Gu was almost prefect during her final run and pulled off a left alley-oop flat five mute at the end to post a score of 94.00 - almost five points ahead of the runner-up.

Canada's Rachael Karker finished in second with a score of 89.20, while Demidova was third to ensure she finished on the podium in four of the five halfpipe competitions this season.

"I’m one of the happiest people ever right now," said the 19-year-old Demidova after picking up the crystal globe.

"Before me, we don’t really have podiums for Russian freeskiers, and now we’ve got a crystal globe.

"I’m super happy with how I’m skiing, but I still made some mistakes in my runs tonight.

"I’m going to put work in for next season and I think I’ll be even better."

Gu won three medals - two gold - at the Winter Youth Olympic Games earlier this year but this is her first World Cup victory.

It was an unreal night at the 2019/20 halfpipe World Cup finals in Calgary, where @eileen_gu_ and @guskenworthy took the wins in the competition, and @v.demidova and @aaronblunck walked away with this season’s crystal globes as the top riders overall. Winning runs to come, but for now check out the podiums and a couple action shots from an epic season-ender...🏆 #snowrodeo #fisfreestyle #fisfreeski #halfpipe #congratulations

Kenworthy won the men's event to cap a brilliant return to action for him, but the big story was Calgary's Noah Bowman coming fifth.

His slide down the standings means that, despite picking up the most halfpipe points this season, he isn't the overall World Cup winner.

The FIS scoring system only takes into account an athlete's four best finishes, hence Blunck - who injured himself in qualifying - is the crystal globe recipient.

"I’ve had some goals that I’ve wanted to achieve in my career and winning a crystal globe has always been one of them,” Blunck said before going on to praise Bowman.

"Noah’s my favourite guy to watch in the halfpipe.

"The moment he drops in I feel like it’s all eyes on Noah.

"We have two completely different styles, but the friendship between us keeps growing all the time.

"The way we got to battle it out all season was incredible.

Kenworthy's first-run score of 93.20 was enough to secure the win on the night - Britain's first-ever men's World Cup halfpipe victory.