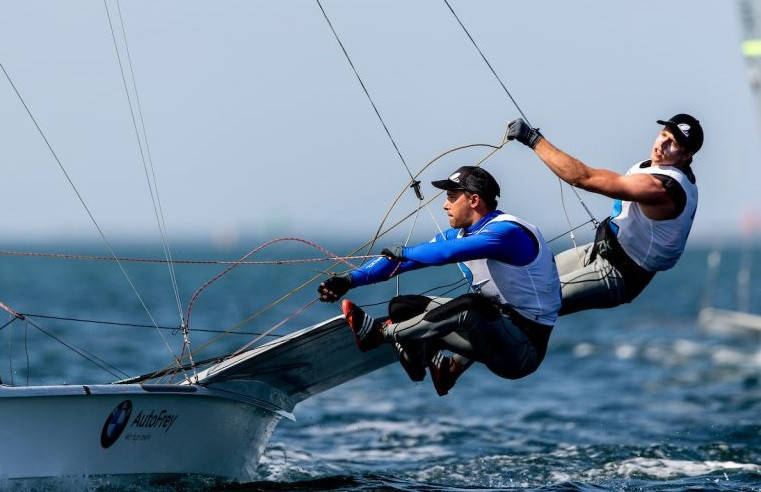 Austria's Benjamin Bildstein and David Hussl claimed the lead in their class after day three of racing at the 49er, 49erFX and Nacra 17 World Championships.

They recorded a race victory and a second-place as gold fleet racing began, and then came home 12th and 20th in the last two races of the day.

The 20th-place is currently discarded as their worst result, leaving them with a total of 27 points.

"After today we have mixed feelings, the first two races we had very good sailing, really good rhythm with the wind," said Bildstein.

"Then with the new system the next two races were really hard.

"At this venue if you play the wind right you are in the front, if you don't get it you are at the back.

"It's pretty hard to get it right."

Olympic gold medallists Burling and Tuke are hoping for a sixth world title and won the 2019 edition in Auckland just weeks ago in December.

They are one point behind the Austrians after coming home first, fourth, 15th and 11th.

The 15th has been discarded but the 11th counts to their score.

In the Nacra 17, Australian siblings Nathan and Haylee Outteridge took over the lead from Britain's John Gimson and Anna Burnet.

They were second, ninth and ninth to sit on 37 points.

This is a gap of 11 over the British pair who had a disappointing day, finishing seventh twice and also 27th.

"Our aim was to continue our form from earlier in the week," said Nathan Outteridge, who won Olympic 49er gold with Iain Jensen at London 2012.

"We are targeting top eights around the first top mark and working forward from there."

Australia's Jason Waterhouse and Lisa Darmanin ended second, 12th and ninth to move up to third overall on 56 points.

They are one place and one point in front of Italy's defending champions Vittorio Bissaro and Maelle Frascari, while Argentina's Olympic gold medallists Santiago Lange and Cecilia Carranza are now seventh.

In the 49erFX, Britain's Charlotte Dobson and Saskia Tidey kept hold of their overnight lead.

They finished third, second and third to end the day on 17 points, an advantage of two over Spain's Tamara Echegoyen and Paula Barcelo.

"We had a really good day," said Dobson.

"We keep finding some space and manging to be fast enough to end up with three top threes.

"I don't know what we are doing right to be honest."

Echegoyen and Barcelo came home first, second and 10th with Denmark's Anne-Julie Schutt and Iben Nielsby now third but a long way back on 42 points.

They ended fifth and sixth and also suffered a disqualification.

Racing continues at the event tomorrow.

It is a key competition before the Tokyo 2020 Olympics, with sailors battling for national selection.