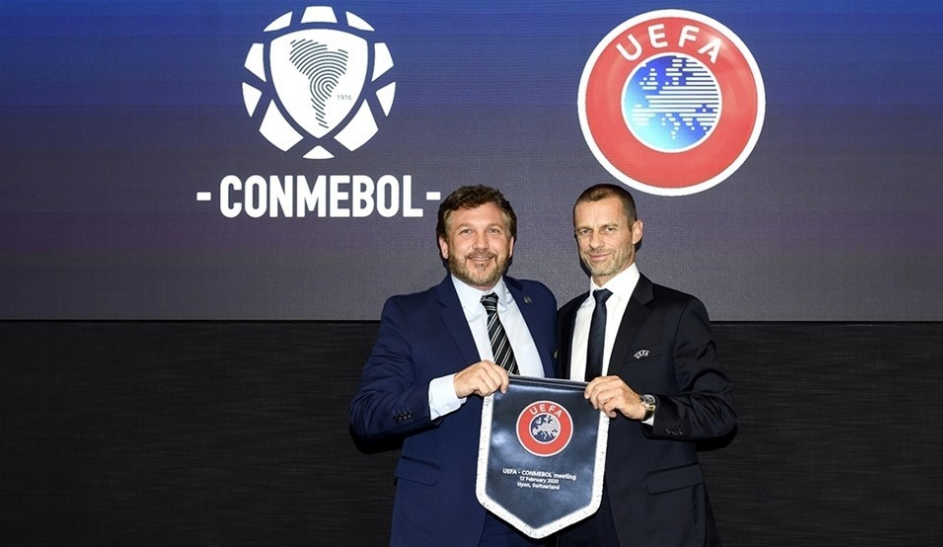 The UEFA Executive Committee and the South American Football Confederation (CONMEBOL) Council have signed a renewed Memorandum of Understanding (MoU) to replace the agreement that was originally put in place in 2012.

The new MoU, signed at the House of European Football in Nyon in Switzerland, forms the basis for an enhanced collaboration in a variety of domains to foster the development and growth of football on both continents.

It aims to provide assistance and support between UEFA and CONMEBOL and their respective Member Associations in establishing and implementing projects and activities relating to things such as education, training, technical development and refereeing, and the promotion and development of grassroots, youth and women's football.

Other aspects include the organisation of football competitions for men, women and youth, as well as futsal; marketing, legal and social responsibility matters; safety and security; and the promotion of ethical and good governance principles in football.

In order to advance cooperation on such projects, both governing bodies decided to create four joint committees to specifically focus on competitions, development, women’s football and refereeing.

Ad-hoc commissions could also be formed to discuss other areas of cooperation when necessary.

"UEFA and CONMEBOL have a long history and tradition together, notably through epic and thrilling competitions such as the Artemio Franchi Trophy and the Intercontinental Cup," UEFA President Aleksander Čeferin said after the meeting.

"This agreement marks a first step in allowing UEFA and CONMEBOL to closely cooperate so that we can share expertise and knowledge for the development of the game on both continents.

"I would like to thank the CONMEBOL Council for coming to visit us and for the many good ideas they have brought to the table."

CONMEBOL President Alejandro Domínguez added: "We had been working months on this in order to have a very constructive and fruitful meeting, and I am delighted that CONMEBOL and UEFA agreed to cooperate further on a variety of topics.

"Together we can do a lot for the development of football and I am very much looking forward to this enhanced collaboration.

"This is just the beginning."

Among the other agreements reached by UEFA and CONMEBOL were a referees' exchange programme which will see match officials from both organisations being appointed to oversee international matches on each other’s continent with a view to providing further experience to referees.

The possibility to stage European and South American intercontinental matches, for a variety of age groups and for both women’s and men’s, was also discussed and will be further examined by a joint UEFA-CONMEBOL Committee in the coming months.

Furthermore, it was agreed to jointly work on a development strategy for women’s football in individual National Associations, and to cooperate in the creation of commercial concepts and networks.

In terms of coaching, a working group will be set up to evaluate minimum criteria in respective Coaching Convention regulations with a view to having future mutual recognition of coaching qualifications.

Technical experts will be evaluating coaching courses implementation and the introduction of a Pro Licence student exchange programme allowing attendance at conferences or seminars and at tournaments as technical observers.

The signing of the MoU has been perceived as sending a signal to FIFA.

Last March, FIFA approved plans for a 24-team Club World Cup in 2021 in China, despite opposition from UEFA.

According to sources, Domínguez was not happy with FIFA President Gianni Infantino speaking directly with South American clubs about their participation.