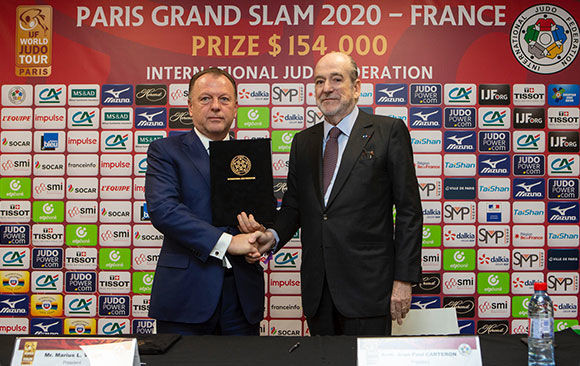 A Memorandum of Understanding (MoU) has been signed between the International Judo Federation (IJF) and the Crans Montana Forum, a Non-Governmental Organisation whose mission is to promote dialogue between key decision-makers to help improve the lives of the less-privileged.

The deal was signed between IJF President Marius Vizer and Jean Paul Carteron, the Executive President and founder of the Crans Montana Forum, during the IJF Paris Grand Slam, which started here today.

Judo will be used to help promote shared values, it is hoped.

"It is an honor and a great pleasure to sign this partnership because we share the same values," said Vizer.

"We plan to launch several educational projects to ignite those values among the youngest, especially now, when society needs them most."

The Crans Montana Forum, founded in 1986 and based in Monte Carlo, already works closely with a number of United Nations agencies, including UNESCO, and the European Union.

"For us, signing this agreement is something very special," said Carteron.

"The Crans Montana Forum has been creating synergies between the political and business world for 30 years.

"We have realised that the world is dislocated, and that sport is the last carrier of intrinsic values needed today.”

The Crans Montana Forum organises several events per year where decision-makers meet in a private and informal setting to discuss the political, social, economic and security challenges of society.

Carteron claimed that judo's values fitted in perfectly with the aims of the Crans Montana Forum.

"Respect is lost, that's why we need judo and that's why this agreement is so constructive and rewarding," he said.

Last month, Iranian judoka Saeid Mollaei received the Crans Montana Forum gold medal for seeking asylum in Germany, after being ordered to throw his semi-final at this year's World Championships rather than risk facing an Israeli in the final of the under-81 kilograms class.

Now a refugee in Germany, the 27-year-old was presented with the honour in Belgium's capital Brussels by Carteron and Crans Montana Forum director general Pierre-Emmanuel Quirin.