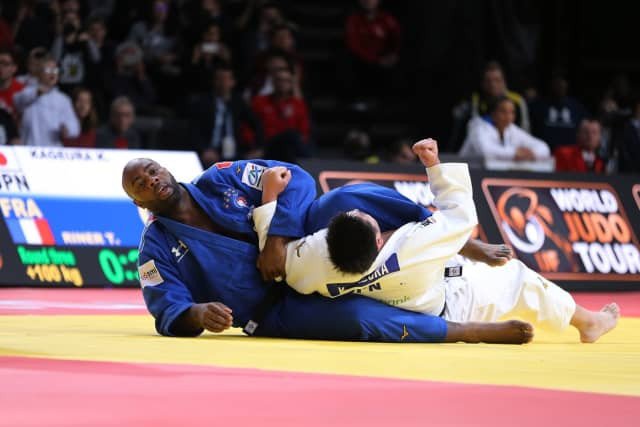 One of the longest unbeaten runs in the history of sport was finally ended here today when Teddy Riner suffered his first defeat for nearly 10 years at the International Judo Federation (IJF) Paris Grand Slam.

The Frenchman was stunned by Japan's Kokoro Kageura during their third round over-100 kilograms bout with a uchi-mata-sukashi after 40 seconds of golden score.

In an instant, the 14,000 capacity crowd went from chanting "Teddy, Teddy" to complete silence.

They could not have been more shocked if they had just been told that the Eiffel Tower was being sold to the British.

To give some comparison as to how good Riner's unbeaten run was, it eclipsed the 122 consecutive races American 400 metres hurdler Ed Moses had won and had lasted longer than the five-and-a-half years Pakistan squash player Jahangir Khan had once remained unbeaten.

In hindsight, the signs were there that Riner was vulnerable as he continues his comeback following a period away from the sport to re-energise his batteries.

Kageura had nearly beaten him at the  IJF Grand Slam in Brasilia last year when Riner needed five minutes of golden score to win.

Riner had also looked slower across the tatami and more sluggish than usual in his first two bouts today in what was his first appearance at his country's most prestigious tournament since 2013 against Hungary's Richard Sipocz and Austria's Stephan Hegyi.

Riner's last loss was also at the hands of a Japanese judoka, Kamikawa Daiki, in September 2010.

In the decade since he last suffered defeat, Riner has won two Olympic gold medals at London 2012 and Rio 2016 and will be chasing a record-equalling third at Tokyo 2020.

"The goal is to win at the Olympics in Tokyo and to be extremely good on D-Day," Riner said.

"This defeat is a failure but it will show me what I have to work on.

"It’s also a relief because I had been under tremendous pressure to always win for 10 years.”

History is made!! After 154 consecutive victories over the course of 10 years Kageura Kokoro is the man to end the reign of Teddy Riner! The whole of France looks on in shock#JudoParis #Judo #Sport #Olympics #Paris #France pic.twitter.com/mqj3Jn9man

Kageura reached the final but then suffered a shock of his own when The Netherlands' Henk Grol beat him.

The 34-year-old is moving up to the heaviest weight category having previously competed successfully in the under-100kg division where he won Olympic bronze medals at Beijing 2008 and London 2012, three World Championship silvers and three European Championship titles.

Grol clinched victory when his score was upgraded from waza-ari to ippon upon a video review, illustrating once again the wonderful unpredictability of sport.

The French crowd, though, still had plenty to cheer with two gold medals for their female judokas in Madeleine Malonga in the under-78kg and Romana Dicko in the over-78kg, the heaviest category for women.

Malonga, winner of the World Championships in Tokyo last year, defeated team-mate Fanny-Estelle Posvite to retain her title in a final that failed to live up expectations.

Defeat for Posvite, who had moved up last year from the under-70kg category, on three shidos all but means that Malonga will secure France's place in this division at Tokyo 2020.

The bronze medals were won by Cuba's Kaliema Antomarchi, who beat another France woman, Audrey Tcheuméo, and Japan's Mai Umeki, awarded a walkover after her opponent, Slovenia's Kiara Apotekar, failed to show up due to injury.

Dicko was a class apart in her final against Belarus' Maryna Slutskaya.

The emerging 20-year-old, whose progress was interrupted last year by injury, but who has started this year with all cylinders firing and clinched victory over Slutskaya with an enormous makikomi for ippon.

First champion of the day crowned was Belgium's Matthias Casse, who beat Uzbekistan's Sharofiddin Boltaboev in the final of the men's under-81kg.

A first Grand Slam title was secured for Casse when his opponent was penalised for the third and final time after one minute of golden score to receive hansoku-make.

Spain's Nikoloz Sherazadishvili, winner of the gold medal at the 2018 World Championships, clinched the fourth Grand Slam victory of is career in the under-90kg by beating Japan's Kenta Nagasawa with an o-goshi for an ippon.

Liparteliani was chasing a fourth victory at this tournament, following wins in 2013, 2015 and 2019, but his bid was ended when he was penalised for diving after being unsuccessful with an uchi-mata attack.

The Netherlands Michael Korrel beat Serbia's Bojan Dosen for one of the bronze medals, and Russia's Arman Adamian defeated Canada's Shady El Nahas for the other.

The next IJF Grand Slam is due to take place in Düsseldorf between February 21 and 23.