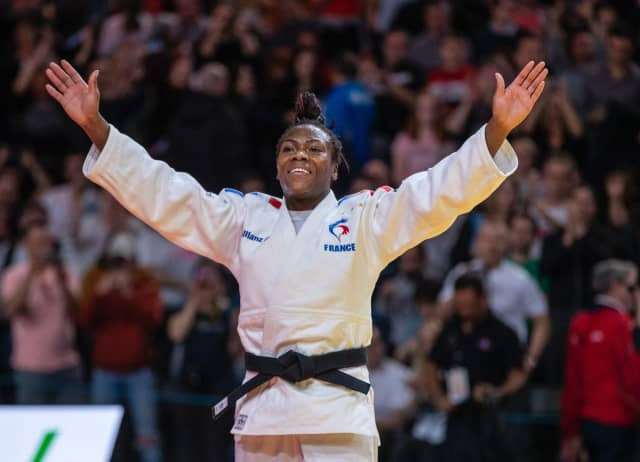 A stirring rendition of La Marseillaise sent a happy French crowd into the evening Paris rain on a high dreaming of Olympic success after Clarisse Agbegnenou defeated one of her main rivals for Tokyo 2020 gold, Nami Nabekura, to win the women's under-63 kilograms at the International Judo Federation (IJF) Grand Slam here tonight.

The 27-year-old Frenchwoman, a four-times world champion, rode the waves of "Clarisse, Clarisse" sweeping down from the stands from the 14,000 capacity crowd to defeat Nabekura by ippon from a ura-nage to claim her sixth title at this event.

Japan's Nabekura entered the final minute of the final with two shidos to her name, so had to gamble by attacking Agbegnenou, only for the home fighter to seize her opportunity and seal the victory.

The first bronze medal was won by Slovenia's Tina Trstenjak, who had beaten Agbegnenou at Rio 2016 to win the Olympic medal.

The second bronze was claimed by Japan's Doi Masako, who beat another Slovenian, Andreja Leški, after she received her third shido.

The 19-year-old under-48kg double world champion retained her Paris title with victory over Koga Wakana, herself only 18.

It meant Bilodid keeps her remarkable record of having faced Japanese opponents nine times and beaten them on every occasion.

Having looked below her best in the earlier rounds, Bilodid rediscovered her zest in the final and won with a waza-ari score from a makikomi.

Krasniqi had been persuaded to step up from the under-48kg division, where she is ranked second and won a World Championship bronze medal in Tokyo last year.

That decision paid off handsomely as she defeated Italy's Odette Giuffrida, who must be getting sick of Kosovans having been beaten for the Olympic gold medal at Rio 2016 by Kelmendi.

Kelmendi cheered the 24-year-old Krasniqi on from the stands as she produced a hiza-guruma to earn a waza-ari score before a frustrated Giuffrida received her third and final shido for pushing out her rival.

The other bronze medal was won by Japan's Shishime Ai, who defeated France's Astride Gneto, beaten in her semi-final by Giuffrida.

The former Japanese competitor, who still lives in Tokyo, caught Dorjsuren with a tomoe-nage for a waza-ari score and comfortably saw out her advantage.

Bronze medals were won by Japan's Tamaoki Momo, who received a walkover as Portugal's Telma Monteiro was unable to compete having been disqualified in her semi-final against Dorjsuren, and Kosovo's Nora Gjakova, who defeated France's Leonie Cysique.

Japan may not have won any gold medals in the women's events but claimed two out of the three on offer today in the men's.

First, world number one Nagayama Ryuju underlined his Tokyo 2020 credentials by coming from behind to defeat Russia's Yago Abuladze in the under-60kg.

Abuladze seemed to be heading for victory when he had Nagayama pinned down, only for his rival to escape after 14 seconds and then immediately fight back with a morote-seoi-nage for a waza-ari score before sealing a remarkable and quickfire turnaround by throwing with an ura-nage to capture the gold medal.

The second Japanese gold medal was claimed in an under-73kg division that had 76 entries as Hashimoto Soichi defeated Kazakhstan's Zhansay Smagulov for his third victory in four years here having previously won in 2017 and 2019.

The Japanese number two countered a modified kata-guruma with te-waza for a waza-ari score with 40 seconds remaining to record back-to-back gold medals on the IJF World Judo Tour having won at the IJF World Masters in Qingdao in December.

The second bronze medal was won by Uzbekistan's Khikmatillokh Turaev, who defeated Turkey's Bilal Çiloğlu within 10 seconds after a stunning o-soto-ko-soto combination.

The third gold medal of the men's events contested today was won in the under-66kg by South Korea's An Baul.