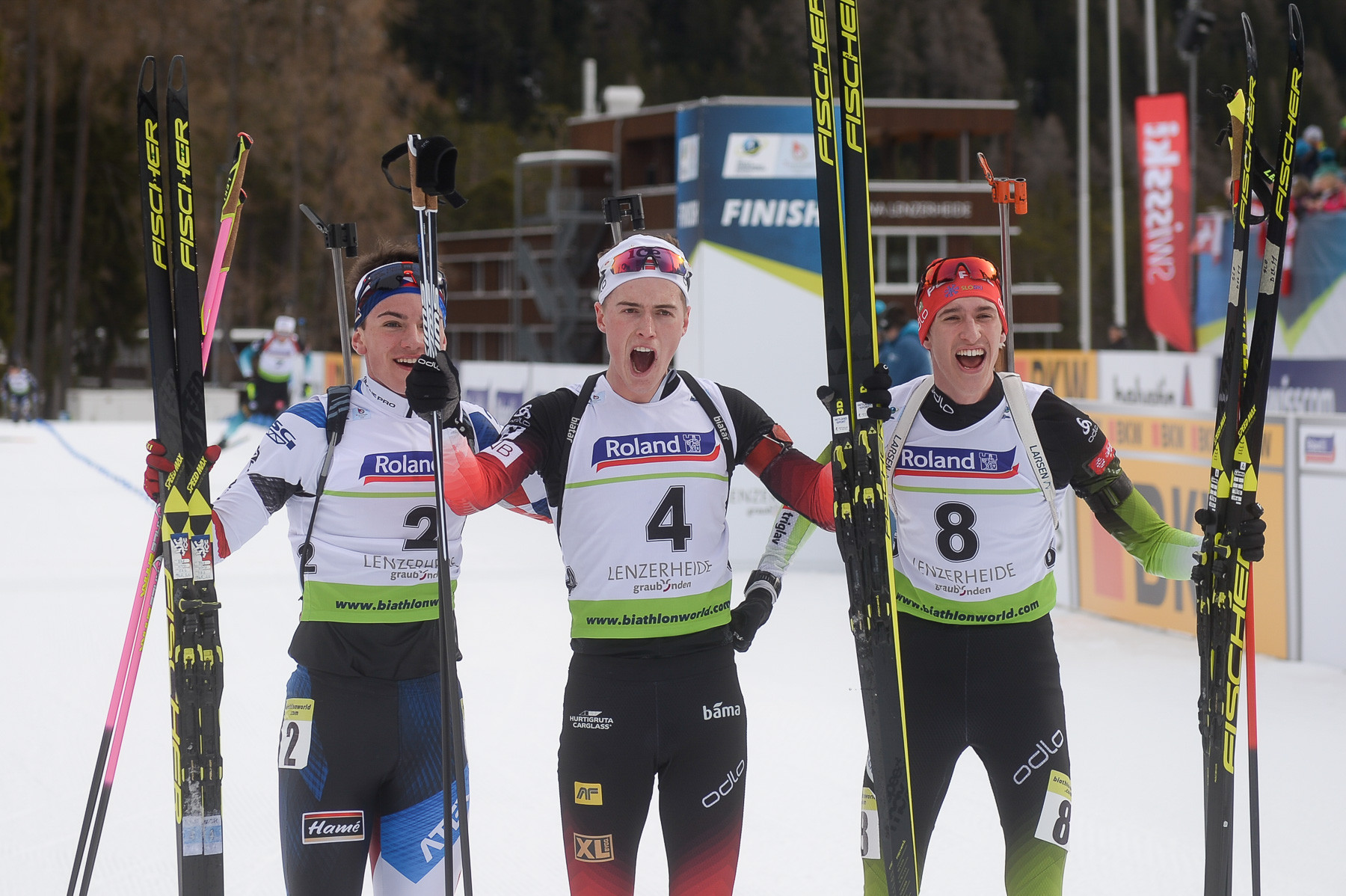 Norway’s Martin Nevland made up for disappointment in the youth men’s sprint to win his third gold on the final day of the International Biathlon Union (IBU) Junior World Championships in the 10km pursuit in Lenzerheide in Switzerland.

Nevland, who earlier in the week won the relay with teammates Martin Uldal and Morten Toernblad Sameien as well as in the individual event returned to the medals after only finishing fourth in the individual sprint.

After giving up three penalties in the sprint race earlier in the week, the Norwegian narrowly missed the bronze medal, but victory never looked in doubt in the pursuit, as he won in 26 min, 28 secs.

The Czech Republic’s Ondrej Manek made it his third consecutive silver of the competition as he was only one of two biathletes in the top 10 with a perfect shooting record, finishing a respectable 25.4 seconds behind Nevland.

Lovro Planko of Slovenia was denied a team medal in the relay earlier in the week, with his team finishing in fourth, but secured his first medal of the Championships with distance between second and fourth – another Norwegian, Morten Hol.

🥇🇦🇹 Gandler: "In the last shooting I though: You have to shoot zero. It is the only chance to win gold. In the whole competitions here I didn't shoot zero in standing."
__#Lenzerheide2020 #YJWCH20 @OESVbiathlon pic.twitter.com/7EU0FesUo9

In the youth women’s 7.5km pursuit, Austria’s Anna Gandler finally won her first gold of the Championships in dramatic fashion.

Gandler, who had previously won bronze in the individual and finished fourth in the sprint was taken all the way to the line for gold by France’s Camille Coupe.

Both biathletes had one penalty lap each throughout their run, with Coupe finishing just 1.2 seconds behind in a sprint finish for the line.

Linda Zingerle had a 21 second advantage after winning the sprint but three penalties cost the Italian the win, finishing 15 seconds winning bronze after gold and silver earlier in the Championships.

In the junior men’s 12.5km pursuit, Danielo Rieth Riethmüller came out victorious in a three-way sprint to the line with Russia’s Said Karimulla Khalili and Slovenia’s Alex Cisar.

The German, who previously won silver in the relay clocked a time of 35:34.2, just 0.6 seconds ahead of Khalili and 1.2 ahead of Cisar.

Only seven seconds behind the winner was Dzmitriy Lazouski of Belarus who finished third in the sprint race but just missed out, with Norway’s Frederik Bucher-Johannessen rounding off the top five, just 10.9 seconds behind Riethmüller.

Sprint champion Vebjoern Soerum had a tough day as he recorded five penalties to finish in sixth.

Seventh in the sprint, Riethmüller chased Khalili, Lazouski and Soerum, recording three penalties, catching Khalili who conceded five, which helped bring other contenders back into the race.

Cisar started in 11th with his near-perfect shooting record the main factor in his rise to the bronze medal – the same for Bucher-Johannessen who was the only biathlete in the top 20 with a perfect record.

In the junior women’s 10km pursuit, it was a lot more straightforward, copying the podium from the women’s sprint as Anastasia Shevchenko won her second gold of the competition with a clean card in 30:45.7.

All three of the top biathletes from the sprint were in fact consistent throughout the race with Norway’s Aasne Skrede taking her second silver with one penalty.

Bulgaria’s Milena Todorova conceded two penalty laps, dropping her off the pace of the front two; but comfortably stayed ahead of Germany’s Lisa Maria Spark finishing fourth ahead of Camille Bened of France, who moved up from 17th in the sprint.

Thanks in part to Nevland’s three golds, Norway topped the medal table ahead of Germany and France as the Championships come to a close.