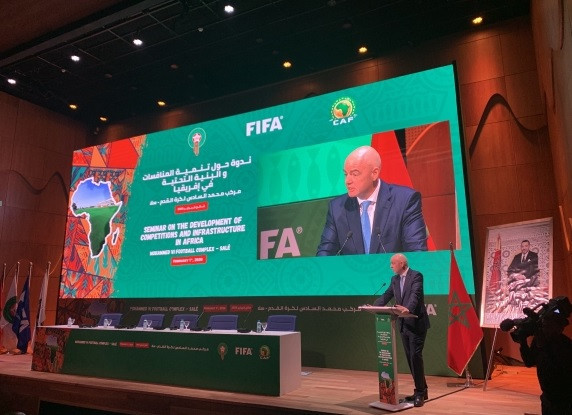 FIFA President Gianni Infantino has called on the Confederation of African Football (CAF) to hold the Africa Cup of Nations every four years instead of two.

Speaking during a CAF seminar in Morocco, Infantino said the proposal would help increase the revenue generated by the continent's flagship tournament.

Cameroon is set to host next year's Africa Cup of Nations, which will revert back to its traditional January-February slot on the calendar.

The 2019 competition, won by Algeria, was staged in June and July for the first time and was expanded to 24 teams.

"I propose to organise the Africa Cup of Nations every four years rather than two years," Infantino told delegates during the seminar, attended by a host of officials from across the region.

Infantino also suggested the creation of a pan-African league, which would include 20 permanent member clubs and teams that qualify via regional competitions.

FIFA claimed the new tournament had the potential to generate a revenue of $3 billion (£2.3 billion/€2.7 billion).

The plan for the Africa Cup of Nations is among the changes being proposed by FIFA to address its ongoing concerns with the state of African football.

CAF Président Ahmad: I would like to thank all the partners and stakeholders for their availability and presence here for this historic séminar" pic.twitter.com/DeVMtbrqvB

FIFA stepped in to control the CAF last year, following allegations levelled at its President Ahmad, and installed Fatma Samoura as general delegate for Africa for six months.

"The competitions don’t give us what they should give us," Infantino said.

"We have to develop African solutions to African problems.

"I think it's time to stop talking about the development of African football, and take actions.

"No African team has won the World Cup, and there is an impression Africa is going backwards."

Brazilian legend Pelé famously predicted there would be an African winner of the World Cup by 2000, which has not come close to being fulfilled.

No African team has gone beyond the quarter-finals of the tournament and all five of the countries from the continent at the 2018 World Cup failed to advance from the group stage.

Refereeing and infrastructure are among the other areas FIFA has highlighted for improvement in African football.

In a statement, FIFA said it would "assemble a panel of partners and a minimum fund of $1 billion (£757 million/€901 million) to make solid and sustainable infrastructural investments in Africa".

The cash injection will be used to build at least one top stadium in the countries of each of FIFA and CAF’s 54 member associations, according to Infantino.

A group of professional referees financed and organised by FIFA in partnership with CAF is also set to be established.