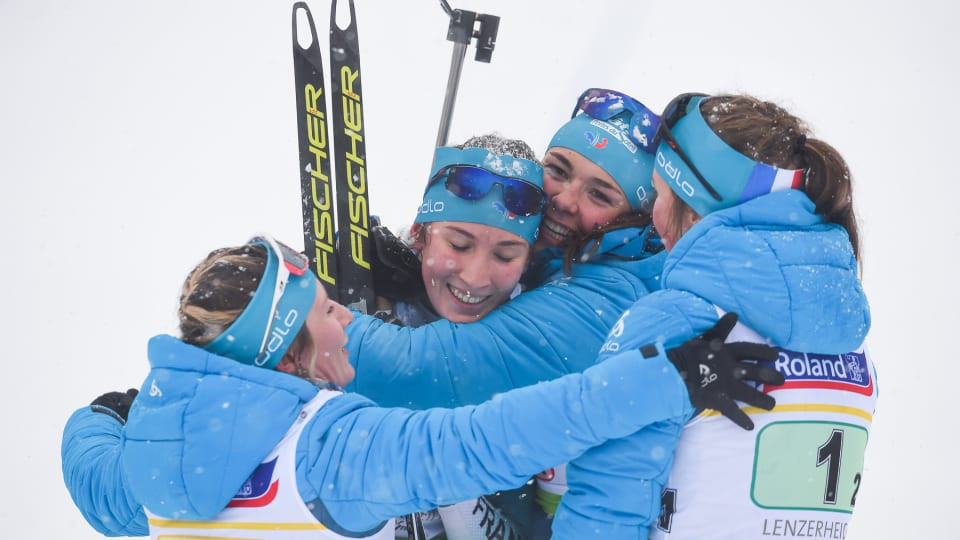 A further 4.9 seconds behind, with 10 spares, were France's Thomas Briffaz, Guillaume Desmus, Martin Bourgeois Republique and Sebastien Mahon in the bronze-medal position.

It is the sixth time in a row that Russia have won the competition.

She was given a lead of 11.3 seconds by her team-mates Camille Bened, Laura Boucaud and Lou Anne Chevat, and the quartet ultimately prevailed in 1:22:49.5, with eight spare rounds.

Russia's Anastasiia Khaliullina, Anastasiia Goreeva, Alina Kudisova and Anastasia Shevchenko were the fastest team on skis today, but Kudisova’s penalty loop proved too much and they finished 15.4 seconds back in second place with one penalty and seven spares.

Norway's Aasne Skrede, Mari Wetterhus, Marthe Krakstad Johansen and Juni Arnekleiv were 2:08.0 off the pace in third, with six spares.

Action in Lenzerheide is due to continue on Friday (January 31).

The youth men's 7.5km and youth women's 6km sprint events are scheduled to be held.