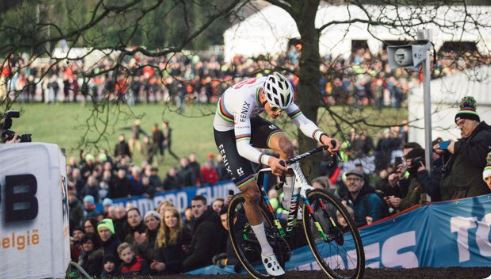 Van der Poel’s fifth victory in this season’s International Cycling Union 2019-20 Cyclo-cross World Cup was an ideal preparation for his defence of the world title in Dübendorf, Switzerland from February 1 to 2.

But after what was the final World Cup leg it was Belgium’s defending champion Toon Aerts who earned the overall title once again after finishing second today.

Aerts has not won a single World Cup race this season, but his consistency has been second to none as he has earned six second places from his nine competitions.

Having arrived with a lead of 41 points over his Belgian colleague Eli Iserbyt, who has won four races this season, he did enough once again to secure a second successive title, with Iserbyt finishing second.

Third place in the overall standings went to another Belgian, Michael Vanthourenhout, who was fourth today in 1:05.28.

🥇 @lucinda_brand 🇳🇱 may have been a pre-race favourite but her path to victory wasn’t straight forward.

After a 2nd row start, a crash and a dramatic final lap she could finally throw her hands in the air for another Hoogerheide win! #TelenetUCICXWC pic.twitter.com/kxDn5YKD7S

Van der Poel earned his fifth World Cup win of the season with a characteristic surge that took him away from the field soon after the halfway point and he finished in 1hr 4min 39sec.

The women’s title also went to a home rider, Lucinda Brand, although she could hardly have been said to have taken the easy route to it.

After a second row start, and a crash, she produced a dramatic final lap to secure victory in a time of 45min 11sec.

Third place on the day went to Sanne Kant of Belgium in 45:15.

Alvarado finished second in the overall rankings followed by Katerina Nash of the Czech Republic.