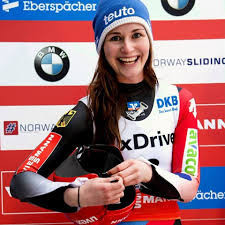 Julia Taubitz of Germany triumphed at the International Luge Federation (FIL) World Cup event in the Latvian town of Sigulda.

The women's luge season has been dominated by both Taubitz and Tatyana Ivanova of Russia so far, with their most recent battle coming at the European Luge Championship last week.

Ivanova was victorious that time, but Taubitz emerged triumphant today.

The bronze medal went to home favourite Eliza Cauce, who finished with a total time of 1:25.094.

Despite her loss, Ivanova remains on top of the overall World Cup standings with 667 points, while Taubitz is second on 650.

Viktoriia Demchenko of Russia trails on 452.

Competition also took place in the doubles event, with Latvian brothers Andris and Juris Sics delighting the home crowd by topping the podium.

They recorded a total time of 1:23.804, finishing in front of two German pairs.

Eggert and Benecken remain on top of the World Cup standings on 667, followed by compatriots Wendl and Arlt on 602.

Their closest opponents are Thomas Steu and Lorenz Koller on 486, with the Austrian pair skipping today's competition.

Action continues tomorrow with the men's event, followed by the men, double and women's sprint.